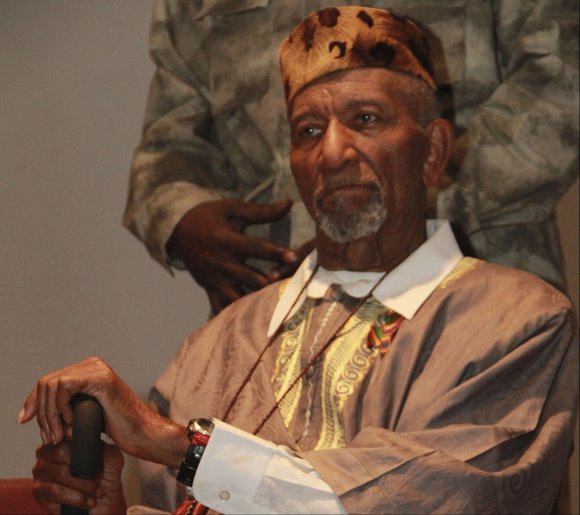 “OK, baby, I will see you later,” said Iyaluua Ferguson as she walked alongside the hearse carrying her husband, Herman, down the drive of their North Carolina home.

Herman Ferguson was never a braggadocio. But Thursday, Sept. 25—when the 93-year-old lifelong international activist made his transition—there was not one, but two rainbows in the sky over Brooklyn. 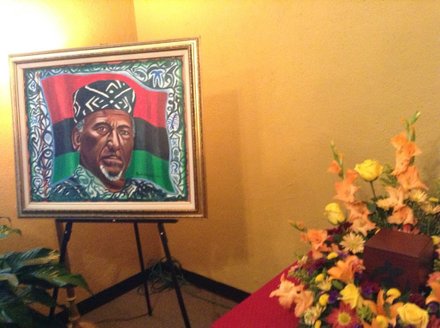 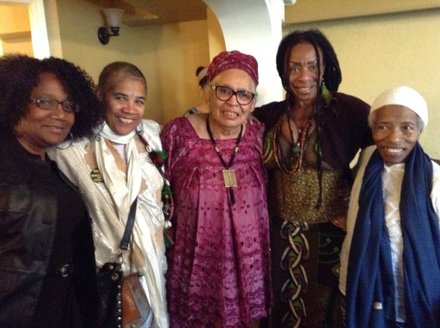 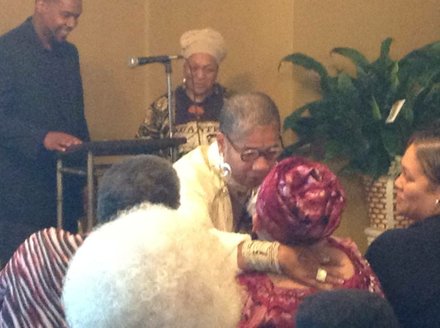 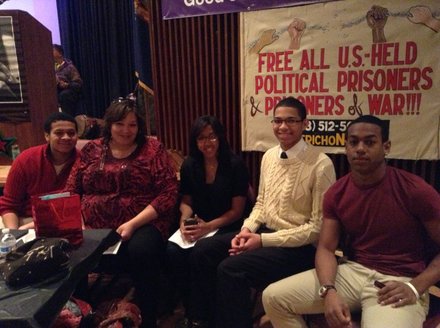 Family of Herman and Iyaluua Ferguson 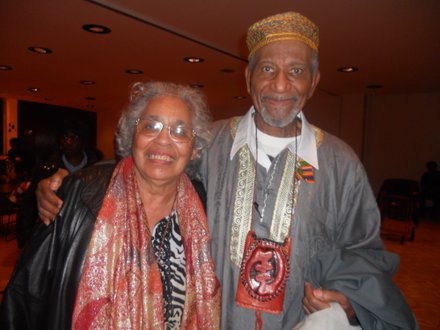 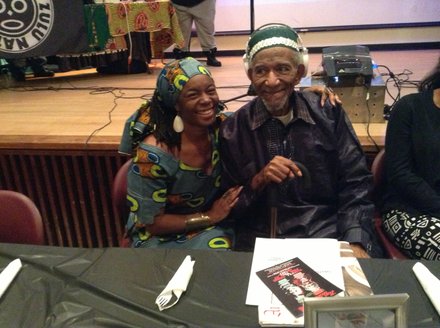 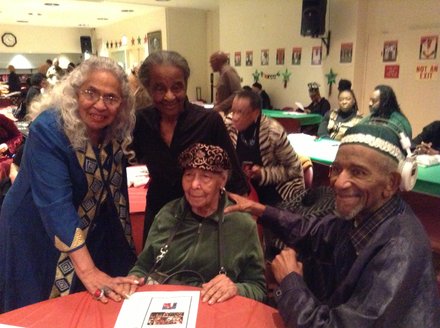 Herman and Iyaluua Ferguson with families of political prisoners at annual dinner. 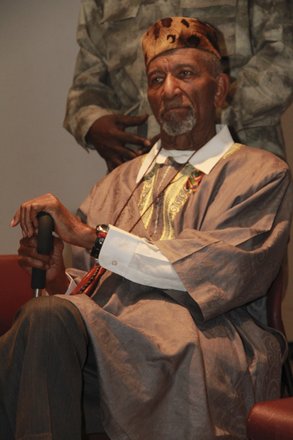 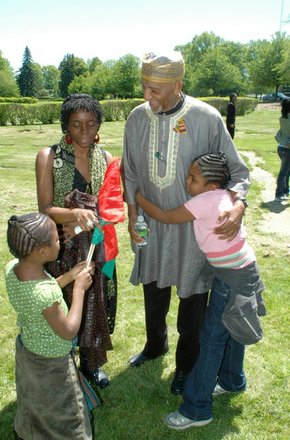 Herman Ferguson at annual pilgrimage to the gravesite of Malcolm X and Dr. Betty Shabazz 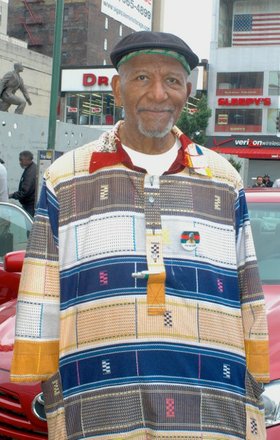 “My father lived a long, productive life,” Michael Ferguson told the Amsterdam News. “All of the things he did were driven by his love for his family and the community. His legacy is incredible.”

Dequi Kioni-sadiki, host of WBAI’s “Where We Live,” told the AmNews of Ferguson’s passing shortly before 4 p.m. Thursday, “Herman made his transition at about 2:50 p.m. He was surrounded by family, and he was at peace.”

Mama Iyaluua Ferguson broke the news to the rest of the world via Facebook later, saying, “It is with great sorrow and sadness that I tell the Black Nation that my beloved husband and comrade of 47 years departed this earthly plane and joined the ancestors this afternoon Thursday, September 25. Herman is loved and will always be loved. Herman is missed and will always be missed.”

Michael Ferguson said that there will be a memorial service held by the Steven Lyons Funeral Home in Raleigh, N.C., Saturday, Oct. 4. There will be car and van loads of people leaving the tristate area to attend what is likely to be a powerful and moving homegoing.

A distraught Zayid Muhammad and Dequi Kioni-sadiki, key members in the Malcolm X Commemoration Committee, spoke sadly on the passing of the founding chairman.

Never awaking from a deep two-day sleep, Ferguson was surrounded by his wife, family members and long-time activist Pam Afrika. Kioni-sadiki said that his final breath was peaceful.

“We have lost an enormous freedom fighter and a great man in Herman Ferguson, a pioneer of the New Afrikan nation, a man whose entire life has been devoted to the liberation of our people,” said Kioni-sadiki, noting that he was “a man of commitment, great courage and principle, a man who had no price and no fear, who we could all emulate, just like so many have emulated Malcolm himself, and not go wrong.”

“Rest in peace, Colonel. My great-grandfather was one of the strongest men I have ever known,” Jarrett Blaize posted on Facebook on the evening of Herman Ferguson’s transition. “I am saddened that you are gone, but I know you will always be with me in spirit. Love you, Colonel.”

A stoic constant on New York’s vibrant Black liberation scene, in 2009—with some reluctance—Ferguson left the beloved city for the quieter and less stressful environs of his native state.

Iyaluua Ferguson told the paper that he passed from congestive heart failure and cardiomyopathy. “The last time he was in the hospital in March, the doctors said that they didn’t want to release him to go home, but to a nursing facility,” she told the AmNews. “MXCC gave us a trip to Florida. We had a nice five days, and then we came home. He was happy we took that vacation. He knew that his heart was weakening. For the last three months, he was in a transition program.”

Iyaluua Ferguson said that she wanted people to know “that all of the outpouring of love and the beautiful things they are saying about Herman have touched me, and they are all helping me through this.”

While still obviously grief-filled, Iyaluua Ferguson told the AmNews, “I have had a lot of time to grieve and mourn, as he has been slipping away. He was getting upset with time.” The retired New York City teacher added that her husband would ask the nurses how long before they thought he would make his transition.

The couple was officially married in Guyana in 1972, but they were together since 1967, creating an expansive, blended family. Children, grands and great-grands now form the vanguard around this much loved and world-renowned grand elder as they prepare to lay him to rest.

Herman Ferguson led a storied life. He already has his book, “An Unlikely Warrior” (co-authored by Iyaluua Ferguson), and there should be a movie. Kioni-sadiki suggested actor Michael Ealy.

Herman Ferguson was born Dec. 31, 1920. He started out as a Merchant Marine seaman and went on to become an influential member of Malcolm X’s Organization of Afro-American Unity. He rattled sabers as a teacher and assistant principal in the New York City public school system, particularly Ocean Hill and Brownsville, all the time raising issues of equality in the streets of Queens. His activism caught the attention of Malcolm X, who arranged to see him. The result of that bond was the founding of the OAAU’s Education Committee, and he was building that organization with Malcolm when Malcolm was assassinated at the Audubon in 1965. For years, if asked, he would speak in great detail about the awful day his comrade was gunned down.

Ferguson’s activism made him a target of the government’s Counter Intelligence Program, and he was charged and convicted by an all-white male jury along with his co-defendant, Arthur Harris, of plotting to kill civil rights leaders Roy Wilkins and Whitney Young in the hope of revolutionizing the Black agenda. Yet, Ferguson did not allow the conspiracy charge to slow his roll, and in 1968, he ran for the U.S. Senate as a candidate with the Peace and Freedom Party.

With pride, he would talk about his being one of the signers of the Declaration of Independence of the Provisional Government of the Republic New Afrika, as he worked until his end with a host of Black liberation and independent organizations. Back in Queens, he helped form the Jamaica Rifle and Pistol Association, where he told the AmNews he would take Betty Shabazz, widow of Malcolm X, so she would be able to protect her family.

He initially escaped the three-to-seven-year prison sentence, becoming exiled in Guyana for 19 years, thriving in their Ministry of Education as Paul Adams. There, with his wife, Herman Ferguson established the Guyanese National Service, retiring as a lieutenant colonel in the Guyana Defense Force.

But he was feeling the calling of the family, “children growing up and missing important times in their lives,” and he wanted to clear his name of “the false charges.” In 1989, urged on by activists Sonny Abubadika Carson and Elombe Brath, Ferguson voluntarily returned to America, where he was immediately arrested at New York City’s JFK airport.

After his 19 years in exile in Guyana and his stint in New York state prisons, the late Judge Bruce Wright ordered his release in 1992.

Ferguson, in his 70s, hit the ground running. Upon his release, he dove deep back into the Black liberation movement. He called up surviving members of the Organization of Afro-American Unity to reclaim the distorted mainstreaming of Malcolm X’s legacy. The Malcolm X Commemoration Committee arose phoenix like, with members such as Jean Reynolds, Yuri Kochiyama, Sam Anderson, Butch Gladstone, attorney Joan Gibbs, Bruce Ellis, Rosa Ellis and Zayid Muhammad.

Aside from joining the annual pilgrimage to Malcolm X’s gravesite in Ardsley, N.Y., they began an annual dinner tribute to the families of Black political prisoners. Furthermore, for 10 years they published the Afrikan Liberation Front newspaper Nation Time, and Iyaluua and Herman Ferguson, both teachers, enthusiastically launched “Malcolm X in the Classroom” with an annual essay competition and oral history presentation.

As if all of this was not sufficient, in 1997, Herman Ferguson and the late Safiya Bukhari-Alston created the Jericho Movement to highlight the existence of and free stateside political prisoners. From Mumia Abu-Jamal to Sekou Odinga, Mutulu Shakur and dozens of others, Herman Ferguson fought for their release.

He still wasn’t done, and this reporter would often tell him, “You swear you’re 15—all that energy you have!”

Deep into his 80s, alongside his wife, Herman Ferguson penned his long-awaited memoir, “An Unlikely Warrior.”

“This is considered a must-read for serious students of Black Nationalism and of the legendary Black radical tradition,”said Zayid Muhammad, MXCC press officer. “His was the only draft in my life that I ever answered. Make no mistake about it, Baba Herman was our rock, our glue, who held us together and shaped our direction, identity and character.”

Karima Nilaja Blaize shared that Thursday “was bittersweet for me, as it was not only the day that I celebrated the birth of my youngest children, Justin and Jarrett, but also a day that I mourn a great loss—my grandfather. As the patriarch of my family, ‘Colonel’ was the strongest man I have ever known. One who has taught me so much about who I am, where I come from and the importance of fighting for what I believe in. One who was so strong that he was able to save me by literally plucking me from the water after I had fallen out of a boat as a child, and then endure the many years of the craziness that was Karima that followed. And, of course, a man so strong that he could do this while loving my grandmother, Iyaluua, to the moon and back and serve as the patriarch of the Black Nation.”

Blaize concluded, “While he will be missed, I know that he is home now, where he will continue to watch over us all … and maybe even assist my overworked guardian angels.”

Mani Gilyard, MXCC co-chair and a long-time friend, said, “Herman unquestionably cut out the mold of our work and how it was to be done. Once he retired, all we had to do was to follow the mold.”

Herman Ferguson would sign off and even sometimes begin a conversation with his obligatory, “Free the land!” and “By any means necessary!” He was a fighter to the end.

“I have received so many words of comfort and beautiful condolences,” said Iyaluua. “I am on Facebook a lot, and I am moved by all the love and respect being expressed for Herman and myself, from people who worked with us here and in Guyana. He lived a good life and a very productive life, and I am being made aware of just how may people were aware of him, and I am grateful that he touched so many people, and they have been so expressive.”

Left to cherish his memory and honor his legacy are his wife, Iyaluua; two sons, Michael and Mark; twin daughters, Jacqueline and Constance Ferguson; his stepdaughter, Nilaja Turner-Magbie; his niece, Dawne Easley Claiborne; 11 grandchildren; 12 great grandchildren; two great-great-grandsons, Steven Jr. and Jacari Herman; and a host of in-laws, friends and comrades in the struggle.

Visit www.stevenlyonsfuneralhome.com/new_view.php?id=5343526 for more details about the service in North Carolina.