Grand designs and Renaissance tapestry on view at the Met 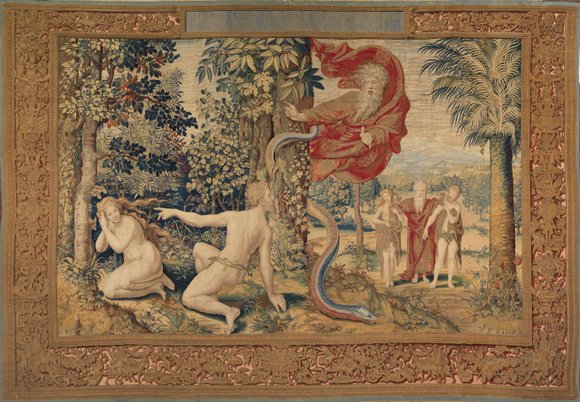 God accuses Adam and Eve after the Fall from The Story of Creation by Pieter Coek van Aeist, ca. 1548 Photo by Bruce White

“Grand Design: Pieter Coecke van Aelst and Renaissance Tapestry” explores the artist’s career and reunites many of his finest surviving drawings, panel paintings and cartoon fragments with 19 of the spectacular Renaissance tapestries that were made to his designs. These massive hangings were the ultimate medium for Coecke’s artistic expression, yet while they were being woven, he never touched them. In fact, they were executed by weavers who superbly translated his vision with brilliant silks, wools and precious metal-wrapped threads. The splendid tapestries—many on loan for the first time from the major royal and national collections of Europe—reveal the monumental scale, stunning palette and artistic daring of this important Renaissance master.

This splendid exhibition is made possible by the Siebold Stichting Foundation and Fukushima Medical University. Additional support is provided by the William Randolph Hearst Foundation, the Gail and Parker Gilbert Fund, the Diane W. and James E. Burke Fund, the Andrew W. Mellon Foundation and the Hochberg Foundation Trust.

Born in 1502, Coecke was trained in Antwerp, probably in the workshop of his father-in-law, Jans Mertens van Dornicke. He may have been a youthful collaborator of the great Bernard van Orley (ca. 1492–1541/42). Coecke established his workshop in Antwerp in the late 1520s and went on to dominate the artists of his own generation. He also supported the early career of Pieter Bruegel the Elder (ca. 1525–1569), who later married Coecke’s daughter.

His eclectic, mannerist style was nurtured through trips he made to the Italian peninsula and, in 1533, to Constantinople. During the 1530s and 1540s, he produced groundbreaking designs for a myriad of media. By the time of his early death at 48, Coecke had become one of the most influential and celebrated artists of his generation, and his workshop was among the largest in Antwerp in the first half of the 16th century.

To many of his contemporaries, Coecke’s most admired works were his tapestry designs. Apparently trained as both a panel painter and a painter of the paper cartoons, or models, needed for tapestries, Coecke pushed the glamorous, monumental textile format to new heights with inventiveness, wit and elegance. The 19 epic tapestries on view in the exhibition will be juxtaposed with seven of Coecke’s panel paintings, including a monumental triptych from Lisbon, and 36 drawings and prints, including woodcuts and books.

Among the most sumptuous art works of the Renaissance, these tapestries were woven in the great workshops of Brussels and made for a roll call of the most distinguished collectors of the period, such as the Holy Roman Emperor Charles V, France’s Francois Ier, Henry VIII and Cosimo de Medici. Many of these tapestries have not been on public view for decades and have undergone cleaning and conservation in preparation for the exhibition.

In the midst of this productivity, Coecke also traveled extensively. Another highlight of the exhibition is a fascinating 14-foot-long woodcut frieze he designed that records his experiences in Constantinople. Also included will be Coecke’s influential translations and publications of architectural treatises by Vitruvius and Serlio.

This visually smashing display of outstanding tapestries provides a long-overdue reassessment of Coecke’s achievements as a master designer who devised projects across media. The catalogue for the exhibition, the first monograph of Coecke since 1966, was written by a team of international scholars, and published by the Metropolitan Museum of Art and distributed by Yale University Press. This is an entertaining exhibition for the family during the holidays.