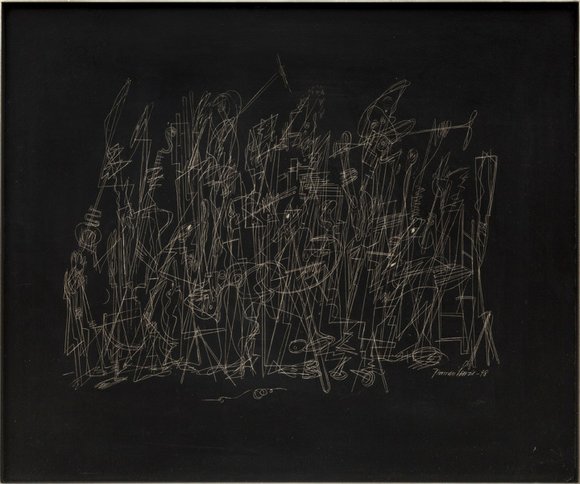 The Jewish Museum, located at 1109 Fifth Ave. on Manhattan’s Museum Mile, has a couple of surprises for visitors. For one, it is an art museum, not just a Jewish history repository. The almost 30,000 works housed there all relate to Jewish art or culture in some form but are diverse in medium, style and message.

The other surprise from the Jewish Museum is that not all of the featured artists are Jewish. There is currently an exhibition called “From the Margins” that highlights the mid-20th century works of female Jewish artist Lee Krasner and Black artist Norman Lewis.

Both Krasner and Lewis were abstract expressionist painters, who weaved their respective cultures into their work. Krasner’s “Little Image” series of paintings recall her upbringing in Hebrew school, as she chose to create those works from right to left as one does when writing in Hebrew. Lewis, in his “Little Figure” series, often infused aspects of jazz and urban life in general, but Harlem in particular.

At first glance, Lewis’ “Jazz Band” looks like a jumbled array of lines, but then it is a tad reminiscent of a city skyline and closer inspection reveals the outline of a jazz band in performance.

“Art is the expression of unconscious experiences common to all men, which have been strained through the artist’s own peculiar associations and use of his medium,” said Lewis about the definition of art. “In this sense, it becomes an activity of discovery, emotional, intellectual and technical, not only for the artist but for those who view his work.”

The carefully curated, 40-painting exhibition was created by Norman Kleeblatt and Stephen Brown. Why put the works of Krasner and Lewis side by side for this exhibition? Kleeblatt had an explanation. “As a woman and as an African-American, they were marginalized in the general reception of the art they created,” said Kleeblatt during a media luncheon at the museum. “The works of Krasner and Lewis bear intriguing parallels. They reflect each artist’s personal sensibilities and background.”

You don’t have to be Jewish to go to the Jewish Museum, just have an interest in art and an open mind to learning about various histories, cultures and artists.

“From the Margins” is on display until Feb. 1, 2015. For more information, visit http://thejewishmuseum.org.