When Baron Samedi comes: The Death of Jean-Claude Duvalier 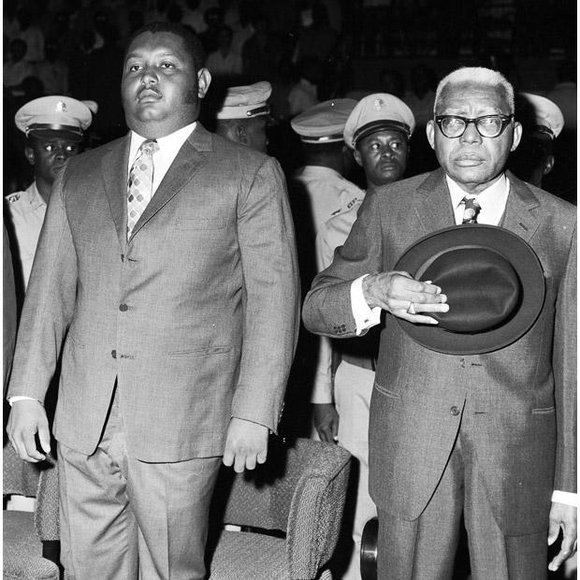 Saturday, Oct. 4, one of the most brutal dictators of Haiti, Jean-Claude “Baby Doc” Duvalier was dying of a heart attack at his home in Thomassin, a Port-au-Prince mountaintop suburb, as an old, familiar friend, dressed in a top hat, black suit and dark glasses, paid him a final visit. Duvalier’s friend who visited him on that day as he clung to his life while facing death was Baron Samedi.

In the philosophy and science of Haitian vodou, Samedi is the lwa (god or master) of the dead. Samedi is also the master and giver of life within the worldview and spiritual reality of Haitian vodou. In the hopes of giving the people of Haiti life again, Samedi decided to visit Duvalier as he was having a heart attack. In his unwelcome visit to Duvalier’s home, Samedi, with his imposing and puissant mien, happily greeted Duvalier with his strange but convincing, nasal-toned voice by saying, “Come with me!”

Even though that was the last time Duvalier heard the words, “Come with me,” it certainly was not the first. Duvalier had known Samedi since his birth, July 3, 1951, when he probably heard the words “come with me” or “follow me” from a man who closely resembled Samedi in stature, appearance, voice and actions, especially regarding the countless deaths of Haitians who opposed him.

Often dressed as Samedi, Francois Duvalier ruled Haiti with an iron death grip from Oct. 22, 1957, until his death April 21, 1971. During his oppressive reign, Francois Duvalier would order an unwilling Jean-Claude Duvalier to come with him to witness Haitian political prisoners being tortured by way of sulfuric acid baths.

Before his death in 1971, Francois Duvalier established a ruling oligarchy in Haiti. Moreover, by 1971, Francois Duvalier established a hereditary dictatorship in Haiti as he named Jean-Claude as his successor. Hence, one day after his father’s death, at the tender age of 19 years, the unprecocious Jean-Claude Duvalier unwillingly followed in his father’s footsteps by becoming the world’s youngest head of state as the president of Haiti.

Jean-Claude Duvalier was, at first, unwilling and uninterested in becoming president of Haiti, perhaps because of his early experience with his father as he tagged along to witness the most repugnant forms of torture on the people of Haiti. As such, Jean-Claude Duvalier motioned for his older sibling Marie-Denise Duvalier to succeed their dad as president.

However, Jean-Claude Duvalier’s nightmarish experience with his father did not alleviate the pain or suffering perpetrated on the people of Haiti as exhibited by the elder Duvalier—it only exacerbated the pain and suffering under his brutish style of rule. Unfortunately, like father, like son. Jean-Claude Duvalier followed in his father’s footstep as an evil, mean-spirited, brutal dictator who simply served the avaricious interest of the European-American world while oppressing the people of Haiti.