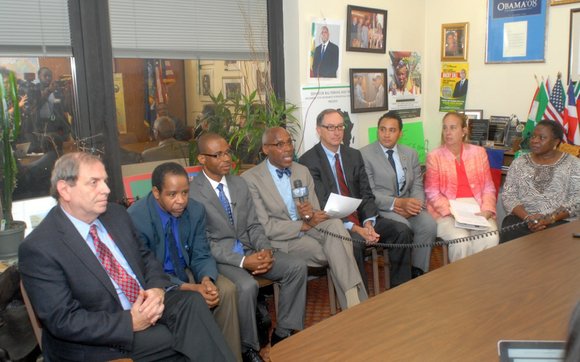 This Tuesday, Mayor Bill de Blasio told a gathering at an Ebola education forum at the Jacob Javits Center, “This city has been preparing and drilling for weeks and weeks. And we know that we’re ready. And—thank God—not a single confirmed case of Ebola in New York City or New York state.”

Hysteria, fear and paranoia have made Ebola the most trending topic everywhere, and now reports are that a person in Newark, N.J., might be infected with the disease.

The convention center was like a movie set Tuesday as Gov. Andrew Cuomo, de Blasio, 1199’s George Gresham and white-coated and green-scrub-wearing medical personnel all converged.

Cuomo addressed the thousands of health care workers who attended the Ebola education session, co-hosted by the Greater New York Hospital Association/1199SEIU Healthcare Education Project and the Partnership for Quality Care, who, along with the Centers for Disease Control and Prevention, demonstrated new guidelines and techniques proposed by federal health officials.

The Department of Homeland Security has stated that any person coming in from the affected nations in West Africa must enter through one of five airports for screening: JFK, Newark Liberty, Washington’s Dulles, Atlanta’s Hartsfield-Jackson and Chicago’s O’Hare.

At the health forum Tuesday, de Blasio proclaimed, “We have the world’s strongest public health system here in this city and state. We have the best-trained people. City and state are constantly in dialogue, constantly adjusting strategies, working together, working with the CDC. Voluntary hospitals, public hospitals—working as one. Labor and management working as one. Every emergency room at HHC hospitals has been retrained in safety protocols. Training is being provided for all staff who work with high-risk patients. And we know if we do, if, God forbid, we do have a patient with Ebola, there are … very clear protocols—to diagnose, to isolate and to treat. Every hospital in the city is working with those protocols and is ready. And we’ve taken special efforts to create at Bellevue the capacity for whatever situation is thrown at us.”

New York has designated eight hospitals as primary treatment centers for Ebola, although all hospitals are expected to have at least one isolation room that could handle a case. Five of the hospitals are in New York City: Bellevue Hospital Center, the city’s flagship public hospital; Montefiore Medical Center; Mount Sinai; New York-Presbyterian; and North Shore-Long Island Jewish Health System.

New York City, home to a large population of West Africans in the Bronx, Staten Island and Harlem, has yet to report any cases. Some 150 representatives of the various city unions gathered with top officials from the de Blasio administration in lower Manhattan at the headquarters of the Sanitation Workers Union for Ebola education, complete with a demonstration on what to do in case of an emergency, including how to properly wear protective clothing, based on World Health Organization protocols.

“These are the people who are what New York City is all about, and we need to get them engaged,” said First Deputy Mayor Anthony Shorris. The goal is to make sure “they understand the facts and what are not facts.” Officials reported that some layers of protection were good, but too many layers were bad because they made both work and removal of the layers more difficult, increasing the risk of contamination.

“We have been practicing,” said Rajesh Verma, chief of the Emergency Department at Harlem Hospital at a recent community talk. Officials at the meeting passed out flyers with important information about the virus and said, like Shorris, that people are not getting the real information. “You can only get Ebola from having direct contact,” said state Sen. Bill Perkins of Manhattan.

According to the World Health Organization, more than 9,000 people have been infected in the epidemic and 4,500 people have died—including more than 200 health care workers. Liberia, Sierra Leone and Guinea, in particular, are in the middle of a medical crisis, with thousands dying of the disease. Liberian President Ellen Johnson Sirleaf said that Ebola has brought her nation to “a standstill,” with more than 2,000 deaths. The World Health Organization gave Nigeria the “all clear” after their “spectacular” response to the outbreak.

A “bitterly disappointed” Kofi Annan, former UN secretary-general, told the BBC’s “Newsnight,” “If the crisis had hit some other region, it probably would have been handled very differently. … In fact, when you look at the evolution of the crisis, the international community really woke up when the disease got to America and Europe.”

“Ebola is not ISIS,” slammed Mark Riley, host of “The Mark Riley Show” on the Progressive Radio Network. “The president said send in the troops. It makes no sense to me. My question is, are we doing enough to fight the spread of the virus in Africa? The Cubans are making America look real bad going all out in the way we haven’t. Nigeria is Ebola free. It has been quoted that Nigeria’s response was head and shoulders above all others.”

Ban Ki-moon asked the international community to step up its donation efforts in the wake of a United Nations Ebola drive that has raised a relatively measly $100,000 since September.

Speaking to the Amsterdam News, the New York tristate chapter of the Sierra Leone Nurses Association said, “We strongly believe that it takes the will and participation of our Africans to make a conscious effort to come back home not just to visit, but to also help. We believe that we need the support of the diaspora, African-American, Caribbean and many more communities to help collaborate with us in providing relief efforts and supplies.”

What there is not a shortage of is opinions from professional pundits, right-wing opportunists and ultra-convinced conspiracy theorists.

“The Tuskegee experiment, the book ‘Medical Apartheid,’ the giving of smallpox blankets to the indigenous by the pilgrims should be enough to make people consider the idea that Ebola is a man-made disease created by the West for population control and snatching the precious resources of the world, mostly based in Africa,” determined activist Divine Allah. “They are experimenting on us. And they’ve got some of us thinking that we can never go home to Africa because of a disease like Ebola. But at the same time, they are there stealing oil, gold, diamonds and everything else while their troops try and take over the land.”

Riley questioned the international response. “I have been bewildered by this whole thing,” he said. “It is not like this thing has just appeared. People have died for years from Ebola. And those politicians who are calling for a travel ban should hang their heads in shame. None of them have been able to explain what good that ridiculous position would do.”

“If flights from Africa are banned, should Africa ban all foreign companies exporting goods out of the continent?” asks the Monrovia, Liberian-born Bleejay Innis, executive director at Bishop John & Irene Innis Foundation. “Let’s see where the rest of the world will get their precious oil, gold, diamonds, rubber, cocoa, palm oil, iron ore, etc. from Africa literally has the power to shut down the world’s economy. So when all these ignorant so-called experts get on TV and say let’s ban flights from Africa as a solution to Ebola, they need to realize it is Africa and Africans who made their countries what they are today.”

While some people question the care that was given to Thomas Eric Duncan, the Liberian who was the first person to die of Ebola in America, and compare it with the treatment the three white health care workers who were flown to the U.S. after contracting the disease and survived, the Internet is on fire with reports that the Ebola treatment is only effective on white people. Nigerianwatch reports, “Medical experts from the U.S. Centers of Disease Control in Atlanta have expressed fears that a recent Ebola trial vaccine used to treat patients only happens to be effective on white Caucasians. Across the West African sub-region as a whole, over 1,400 people have died from the highly contagious Ebola virus disease, including nine in Nigeria, who came in contact with a visiting Liberian. Several European and American doctors who have been treating patients have also contracted the virus but all of them have recovered after being treated with drugs like ZMapp.”

Minister Menelik Harris of theWorld African Diaspora Union told the Amsterdam News, “The Ebola pandemic is a renewed threat employed against African people and therefore those in diaspora are urged to give unconditional support and assistance to Cuba to spearhead the crushing of this 21st century peril, as we have done for the political liberation of Africa against colonialism.”

Harris, who was the National Africa Organizer under the Rev. Dr. Wyatt Tee Walker, noted, “We now urge the greatest global vigilance, actions and mobilization of resources for Africa culminating on the United Nations Human Rights Day on December 10, 2014.”

Asking for volunteers, the Sierra Leone Nurses Association, along with the Ebola Task Force created by the Sierra Leone Embassy, said, “As a community-based volunteering organization, we are requesting for supporters, volunteers and donors,” of finances and equipment such as gowns, gloves, face shields, respirators, masks, goggles and other PPE equipment. For more information, log on to http://slnanyt.wix.com/slna-nyt.

They also told the Amsterdam News, “We think it is important for the Bronx to respond to this issue. You all have the largest concentration of Africans in the USA. Needs must be addressed and collaboration is called for.”