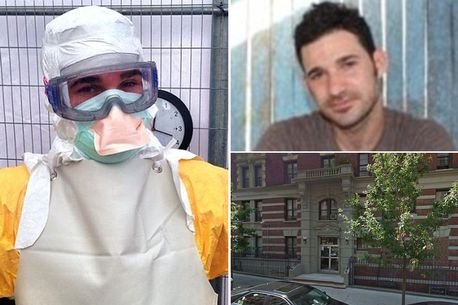 “There is no reason for New Yorkers to be alarmed,” the mayor began. “Ebola is an extremely hard disease to contract, and only through the person’s blood or other bodily fluids…and not through casual contact.”

The mayor explained that New York has been prepared for such a circumstance and that all the protocols have been strictly followed. He said that Bellevue Hospital where the patient is currently in isolation is specially designed to deal with an incidence of Ebola.

Without mentioning Dr. Craig Spencer, the patient, Mayor de Blasio recounted the day of details of how the disease was contracted. Dr. Spencer, 33, who lives in Harlem, is a member of Doctors Without Borders and was working in Guinea with Ebola afflicted patients before returning to the U.S. on Oct. 17. He was very much aware of the precautions necessary for anyone working in close contact with the virus and carefully monitored his condition daily.

“He took his temperature twice a day since arriving from Guinea,” said Dr. Bassett, picking up where the mayor left off. “The first actual symptoms the patient displayed were today. Sometime between 10 and 11 this morning he began to experience a fever and contacted the health department.”

Among the crowd gathered outside Dr. Spencer’s home when the ambulance arrived to take him to the hospital were a number of neighbors, including Rosie Cruz. “I’ve been out here all day, and watched them take him away all wrapped up in saran or Tupperware,” she told reporters, identifying the protective HazMat outfit. “All of the medical attendants were wearing similar outfits.”

Apparently, Dr. Spencer did leave his apartment as the sickness came on, Dr. Bassett said. “He took the A Train, the number one, and the L Train, and went bowling in Williamsburg, Brooklyn.” But all of this occurred, she added, before the first symptoms of the fever.

There were four people who had been contact with him, including his girlfriend Morgan Dixon. She and two others are in isolation and the fourth, a driver, was reportedly not quarantined.

“We are in contact with the four people,” said Governor Cuomo, “we feel we are in control of the situation and obviously we wish the doctor a full recovery.”

Dr. Spencer is being taken care of by an excellent team, said Dr. Zucker, “all of them highly skilled and prepared to deal with Ebola.” He explained the complications of the disease and the necessity to attend to all of his bodily functions.

“We are sending an additional CDC Ebola response team which is in transit now and they have extensive experience dealing with Ebola,” Dr. Frieden said.

He said that those four people who had contact with Dr. Spencer will be monitored for 21 days.

Councilman Mark Levine rushed immediately to the street where Dr. Spencer lived which is in his district to assure residents that they had no concern about contracting the Ebola virus. A number of health officials were also in the neighborhood passing out literature about Ebola and the precautions to take.