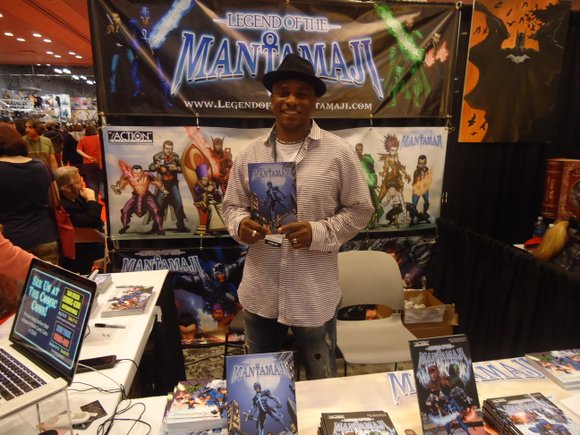 The New York Comic Convention, recently held at the Jacob Javits Center, was a gathering of all things involving the comic book industry. Authors, writers, publishers, retailers and multimedia creators who dwell mostly outside of the realm populated by mainstream publishers such as Marvel and DC, as well as a lot of independent third-party publishers, were showcasing their latest titles to the public.

And...Action! Entertainment was on hand, promoting their latest book series “Mantamaji,” created by Eric Dean Seaton. Having directed television, Seaton’s expertise in creating relatable characters in such a vivid world would draw any reader to “Mantamaji.” He gave the AmNews a little insight into his book series.

AmNews: Since you’re a director in television, why did you decide to make a comic instead of a TV show?

Seaton: As a child growing up in central Ohio, my father would take me to the local comic shop on the weekends. I would read comics on my Saturdays and would love and immerse myself in these comics, but I never really saw any characters that looked like me. Later on, I became a director, but it was always my passion to create my own graphic novel. So I started working, and this is the result of six years’ time. Plus, I would not want to pitch it as a show because I would not be able to have control of my story.

It seems as if the story is based in Egyptian mythology. Can you elaborate more about that?

There is some Egyptian mythology in the underlying story, but I still wanted to create my own world. The basis of it is of an arrogant Elijah Alexander, who is the assistant district attorney of New York, who finds out he is the last of a race of mystical knights called the Mantamaji, who protected mankind 3,000 years ago from the forces of evil. Their home is called Nubia. Their capital city is called Utopia, and their [weapon design] involves an ankh. Simply, it is the story of someone you would never think would have this type of responsibility.

Working with your team on what is now book three of this series, has it become a natural workflow to produce what you have envisioned?

Well, I found Brandon Palas, the artist first, and then Andrew Dalhouse, the colorist—who is an amazing colorist, by the way—and Deron Bennett, who is our letterer. Everyone for the most part recommended each other to do this, and we’ve been working together ever since six years ago.

If you want to check out more on “Mantamaji,” visit www.legendofthemantamaji.com. For more work by Seaton, visit www.andactionentertainment.com and www.ericdeanseaton.com.