Harlem Halloween: To Trick or Treat? 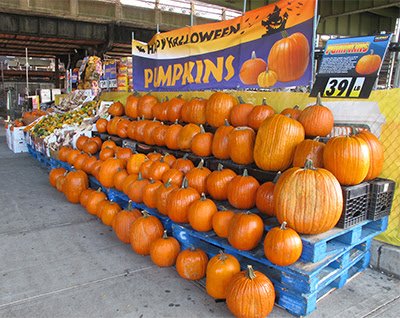 Going door to door for candy isn’t all that Halloween’s about. Dominique Dajer

With Halloween fast approaching, New York City booms with activities and events throughout October for all age groups. Downtown Manhattan has been the spotlight for this holiday, but what about the Harlem area?

Angela Bronner-Helm, a parent who has raised her children in Harlem, believes Halloween has changed a lot. “A decade ago, we had children coming door to door for candy. Nowadays, most children attend Halloween parties at school or go trick or treating at neighborhood stores where the owners or managers give out candy,” she said.

Samantha Gibbons, a 9-year old Harlem student, agrees. “I don’t really have anywhere to go trick-or-treating, except stores,” she says. “So me and my mom carve pumpkins and have a party at my house.”

Gibbons’ mother Pauletta says she doesn’t mind the change. “You never know on Halloween,” she says, while admitting that she grew up in the 80s when crime was much higher in Harlem.

Christina McQueen, a Hunter College student who lives in an East Harlem apartment, says she’s seen the same trend in her neighborhood. “There used to be a lot more kids when I was growing up,” she says. “But maybe if there were more houses instead of buildings, we’d see more kids in the neighborhood instead of major strips like Second Ave.”

Bronner-Helm prefers old-school trick or treating. “It's a shame that we can't meet our neighbors and their children on Halloween today,” she says, “but that's the way of the world.”

Ronaldo Diaz, a delivery man for Westside Market in Harlem, acknowledges that going door to door for candy isn’t all that Halloween’s about. “It’s great for kids to participate in the holiday spirit with pumpkin carvings, instead of just trick or treating,” Diaz said, as a group of kids picked out their own pumpkins.

If you’re searching for Halloween plans and activities for the family, check out these ideas for Harlem-based and local events:

The morning begins with a reading of Eve Bunting’s Night of the Gargoyles, then down to the workshop to assemble gargling, grimacing clay gargoyles, skeleton creatures, and paper gargoyle masks. Recommended for ages 4 and up. $8 per child, with accompanying adult.