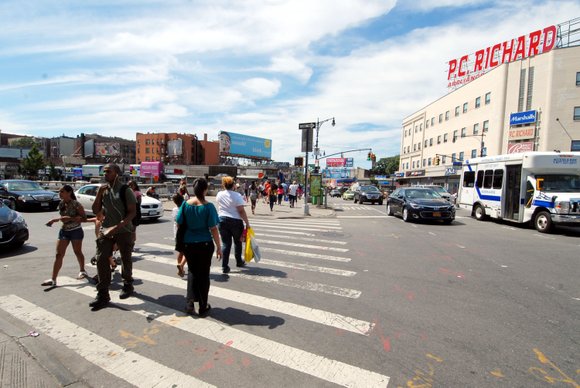 The Bronx. Photo by Karl Crutchfield

Sen. Ted Cruz is attempting to fuel a presidential run in 2016 by leading a stampede of conservatives in Congress who object to President Barack Obama’s immigration policies, threatening a bill that could cause a showdown in September that could possibly lead to a government shutdown.

This weekend, in a speech delivered to the conservative group Americans for Prosperity’s Defending the American Dream Summit in Dallas, the Texas senator said he’s tired of being “lectured” by people like Sen. Charles Schumer (D-N.Y.) about how the South should handle immigration problems when places like New York City have crime problems of their own.

After Cruz took a swipe at Schumer, he tried to take a bite out of the Big Apple

“Now, I understand that Manhattan is very concerned with their security with the Bronx, but it’s a little bit different on 2,000 miles of the Rio Grande,” Cruz said.

Schumer countered by saying, “Senator Ted Cruz ought to join the majority of Republican voters, business leaders and so many Republican senators in doing the right thing to fix our country’s broken immigration system, rather than pouring demagogic oil on the flames.”

Local officials in New York City also objected to Cruz’s comments. City Council Speaker Melissa Mark-Viverito, who has constituents in the Bronx, said the crime rate in the Bronx is lower than in many cities in Texas. “It’s sad that Ted Cruz would use tired and wrong stereotypes about the Bronx to try and advance his extreme political agenda,” she said.

“The truth is the Bronx is growing and prospering and doesn’t need to be insulted by tea party extremists like Ted Cruz.”

Long-time Bronx Rep. Jose E. Serrano said that Cruz is pandering at the expense of the good people of the Bronx, and the tea party is out of touch with real life in our country. “Instead of getting his Republican colleagues to work on passing immigration reform, he attacks hard working people in the Bronx as part of his pathetic approach to deal with the immigration issue,” said Serrano. “Your comments about Manhattan are a cheap shot meant to divert attention away from your failed leadership on this issue. Our country should fear your extreme and divisive philosophy.”

Bronx Borough President Ruben Diaz Jr. told Cruz to “grow up” in a statement and said, “Senator Cruz’s infantile attempt to score cheap political points by slandering our borough is revolting and unworthy of the title of United States senator.”

Council Member Andy King (12th District), co-chair of the Black, Latino and Asian Caucus told the AmNews that Cruz’s words only mean something to those who represent conservative bigotry. “This is the same guy who said, ‘The reason children are coming [to the United States] in staggering numbers is because the president has been promising amnesty,’ which is incorrect,” said King. “He can’t get his facts or statements right. Thus, his words have no meaning, especially as it relates to the Bronx. From Yankee Stadium, to the Botanical Gardens, to the largest indoor mall in the city of New York, the Bronx is 100 years rich with beautiful history that I have not heard one Manhattanite complain about.”

The AmNews reached out to a spokesperson for Cruz about his comments and the responses from New York City officials but received no reply by the time the AmNews went to press.