‘Holler If Ya Hear Me’ was raw and profane Tupac 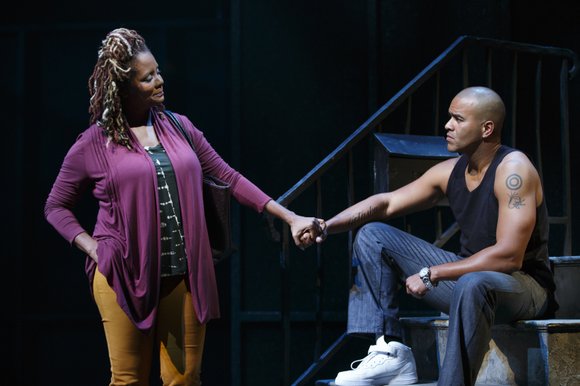 “Holler If Ya Hear Me,” a musical at the Palace Theatre that closed in the summer of 2014, showcased the songs of Tupac Shakur. Production Stills

“Holler If Ya Hear Me,” a musical at the Palace Theatre that closed this past summer, showcased the songs of Tupac Shakur. The lyrics were raw and described the most negative sides of life.

The storyline put the audience into the present day in a Midwestern industrial city on a particular block, where crime, drug use and murder were just part of the daily fare. People didn’t feel safe and gang members ruled. This production consistently showed a sad, desperate side of life. Couple this with the piercingly candid lyrics of Shakur, and you sat in the audience stunned at times. Some parts of this show were very disturbing to watch, and it was sad to see Black life so harshly represented on Broadway.

“Holler If Ya Hear Me,” a musical at the Palace Theatre.

Shakur’s lyrics were about a lifestyle that he obviously knew up close and personal—a lifestyle that may be a reality to some people. Musicals should take you to another world where you would want to be, not one from which you need an additional escape. I don’t think audiences come to musicals to experience all the negative sides of life, with no message of hope anywhere.

To the Tupac fans, there were many enjoyable head-bobbing moments as they heard songs like “Life Goes On,” “I Ain’t Mad at Cha,” “Dear Mama,” “Hail Mary,” “Unconditional Love,” “Thugz Mansion” and “California Love.”

One thing I noticed was that the audience comprised both young and old hip-hop fans. I am not familiar with Shakur’s music, but I had a young person with me who was and she liked the way his songs were presented.

This wasn’t a musical for a very young audience. It was strictly for mature individuals, as harsh, profane language was often used. If the show is ever revived, the creator needs to give serious consideration to the purpose of musical theater on Broadway and realize that musicals are supposed to uplift and inspire, not offend and depress the audience.