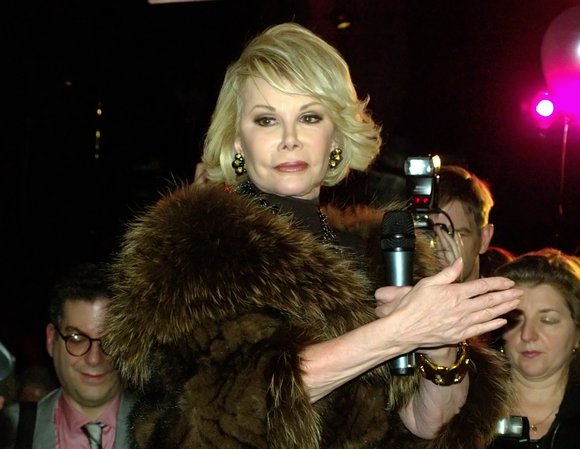 Comedian and talk show host Joan Rivers has died. Remembered for her one-liners and Brooklyn accent, Rivers passed away a week after going into cardiac arrest during throat surgery. She was 81.

Rivers died on Thursday just after 1:15pm at Mount Sinai Hospital. In a statement released by her daughter, Melissa, Rivers died peacefully surrounded by family and close friends.

“My mother’s greatest joy in life was to make people laugh,” Melissa said. “Although that is difficult to do right now, I know her final wish would be that we return to laughing soon.”

Before her death, Rivers hosted the E! Entertainment Television show Fashion Police and starred in the reality show Joan and Melissa: Joan Knows Best? on WE tv. She was currently hosting In Bed With Joan, a weekly internet talk show.

In the 1990s Rivers was best known for her Emmy-award winning daytime talk show The Joan Rivers Show.

“My friend Joan Rivers has passed away once again to quote Billy Crystal... There are no words. Bon Voyage Joan ,” said Whoopi Goldberg.

Actor Samual L. Jackson said, “Love Her or Hate Her, we're gonna Miss JOAN RIVERS! I always Respected her go for broke humor. One of a kind. R.I.P.”

"Never have I met someone who could light up a room like Joan Rivers," said Montell Williams.

"Got an email from Joan Rivers when I left The View that said 'Funny girls always work' Get up Funny Lady you got work to do," said Sherri Shepard.

Donna Brazile said, "My thoughts and prayers for comedian Joan Rivers. She's made us laugh, now let's pray she continues to put a smile on our faces."