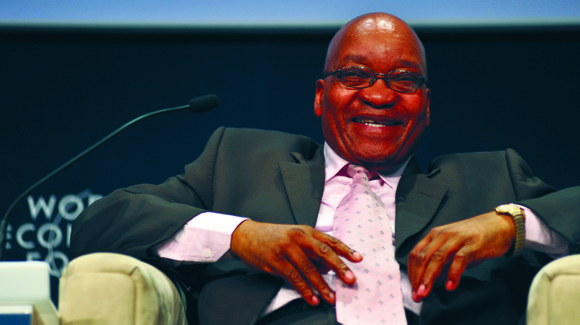 A blizzard of brickbats, insults and other aspersions aimed at South Africa’s public protector assigned to investigate the taxpayer-financed country estate of President Jacob Zuma have roused the Diakonia Council of Churches, a social justice faith-based group, which this week came to her defense in an open letter.

The council said it wished there were more people in public office with Thuli Madonsela’s integrity and courage.

“We express our unwavering support for the office of the public protector ... and applaud [Ms. Madonsela] for her courage and her integrity,” the clerics wrote in a published piece.

“We urge those whom we supported in the days of the struggle against the evil monster of apartheid to not disappoint us now and take us into their version of a ‘monster state’ in which all are afraid to speak their mind and undertake their tasks with courage and integrity,” it said.

Madonsela, an appointee of Zuma with unanimous support from the multi-party National Assembly, had been tasked with investigating complaints about public spending on the president’s private homestead in the KwaZulu-Natal town of Nkandla.

Her final report published in March found that the president had benefited unduly from the $22.8 million the state spent on so-called security upgrades, including a cattle kraal, an amphitheatre, a visitors’ center, a chicken run and a swimming pool. A letter to the president–which was leaked to the public - and requests repayment of the “opulent” and “unauthorized” expenditures - is awaiting response.

For the critical report, Madonsela was vilified by former friends and ANC colleagues even before the document was officially released. Her investigation was dismissed as “political,”she was urged to resign and, most recently, she was accused of “acting like a counter-revolutionary” and being on the payroll of the CIA.

That charge by the minister of defense was the match to dynamite, prompting a demand for proof or a retraction of the charge within 72 hours.

A graduate of law schools in Swaziland and a member of the team that drafted the country’s constitution, Madonsela was in her early years a participant in the armed liberation struggle and in the United Democratic Front anti-apartheid group.

The attacks against her work prompted a finger-wagging from former Archbishop Desmond Tutu. “Maligning the public protector besmirches not only the ruling party, but the entire country,” he said.

“We are proud that South Africa has an office of the public protector. The contempt being shown by the ruling party underlines the slippery moral slope South Africa has descended since the days of hope and promise under President Nelson Mandela.”