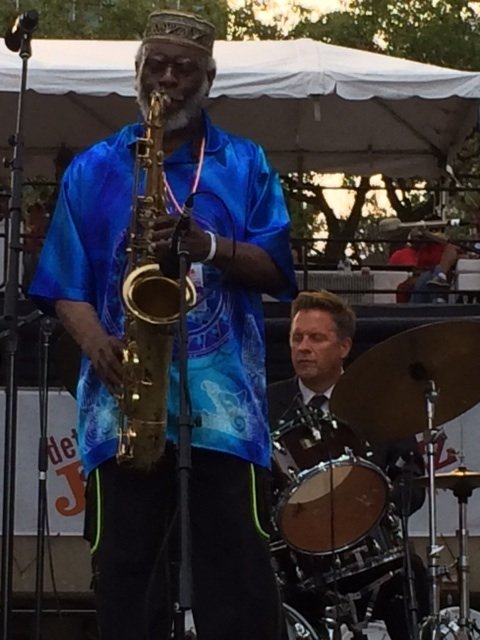 Rain, the demon of outdoor jazz festivals, spread its hysterical tears over the Detroit Jazz Festival last week, denying bassist Stanley Clarke and Dr. Lonnie Smith’s octet the opportunity to close the festival on its Labor Day finale. The prior evening, that ignoring demon abruptly terminated a most rousing performance “To Miles From Wayne,” with Wallace Roney and orchestra, featuring Wayne Shorter’s (two largest works) “Universe” (1967) and “Legend” (1968-69).

Wilkins, the 93-year-old trombonist and veteran bandleader stated, “I am honored to return home and conduct this great Detroit Jazz Festival Orchestra, and to have my hometown friends, Regina Carter, Barry Harris and Tim Ries, as guests is very special.” Detroit vocalists Ursula Walker and Joan Crawford were also featured.


During Wilkins’ two years with the Count Basie Orchestra, he learned “the band has got to swing.” In the Basie tradition, the orchestra took flight on an arrangement of “Sugar,” with Crawford on an up-tempo version of “I Remember You” and with Walker on the ballad “It Shouldn’t Happen to a Dream.”

As a close friend and former member of Clark Terry’s band, Wilkins sang Terry’s signature song “Mumbles.” The audience showed its love with a standing ovation.

“Nicholas Payton: Sketches of Miles & Gil” was an unforgettable moment in live jazz, featuring bassist Vicente Archer and drummer Bill Stewart, with the Detroit Jazz Festival Orchestra conducted by Norah Duncan IV. Payton’s arrangement of the Miles Davis and Gil Evans collaboration on “Sketches of Spain” (Columbia 1960) is just as mystical with its rhythmic Latino swing, but his keyboards bring a fusion intensity.

On “Saeta,” the religious march that starts with a drum roll leads to a superb muted trumpet solo by Payton, and he roars back on keyboards, with responses from bass and drums. Payton took to singing on “When I fall in Love.”

Pharoah Sanders, a saxophonist who is not seen enough, was mesmerizing with his rich distinctive tone. His “Naima” was soul-stirring. Hysteria hit when he played “The Creator Has a Master Plan,” and “You’ve Got to Have Freedom.” The band included pianist William Henderson, drummer Joe Farnsworth and bassist Nathaniel Reeves.

Belgrave had the perfect lead pitch for Wayne State, and once the choir went into “This Little Light of Mine,” the jazz audience fell into a blazing amen sanctified moment.

Vocalist Diane Schuur, known for her American Songbook interpretations, was backed by a string orchestra that featured saxophonist Joel Frahm, guitarist Romero Lubambo and drummer Willie Jones III. Schuur inspired the huge audience with “I Got You Under My Skin,” and “Watch What Happens.”

This festival was the first I attended that featured so many big bands. Nothing can compare with a swinging big band; it shakes your heart and rattles your toes.

On opening night, Harlem was the centerpiece during the festival’s celebration of “A Night at the Apollo.” The concert featured the David Berger Jazz Orchestra, with guest host, tap dancer and singer Ted Levy, vocalists Margot Bingham and Kevin Mahogany and the Wonder Twins dancers.


Once the concerts were over, the hotel jam sessions jumped into the wee hours. One set was trumpeter Sean Jones, pianist Orrin Evans, trombonist Steve Turre, saxophonist J.D. Allen rolling like Dexter Gordon and Detroit’s own Barbara Morrison on blues vocals.


As the Detroit Jazz Festival at Hart Plaza celebrated its 35th anniversary, it remained a Labor Day Mecca, where the jazz is straight-ahead or splashing on avant garde shores. There are no fillers here, no smooth jazz or adult contemporary vocalists.

Detroit, like St. Louis and Kansas City, is one of the important jazz centers in America. As a major city on the “chittlin’ circuit” in the 1940s and 50s, many of the bands played there, including Duke Ellington, Count Basie and Jimmy Lunceford.

The legendary Motown Records made Detroit famous for R&B music, and later its Hitsville Museum became an international tourist attraction. Earl Van Dyke and James Jamerson, key musicians in the Funk Brothers, the backbone of the Motown sound, were both early jazz musicians under the tutelage of Barry Harris.

During the panel discussion on “Remembering Sonny Red,” Barry Harris noted, “Detroit is one of the greatest cities in the world. It’s like heaven to me.”