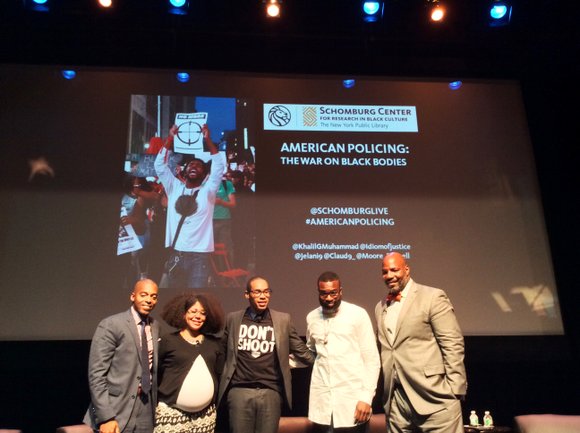 A fired up crowd gathered last week at the Schomburg Center for Research in Black Culture for a town hall meeting. Harlem residents joined a panel of noted academics and activists to discuss the police presence in communities of color following the shooting of Michael Brown in Ferguson, Missouri.

The experts--Khalil Gibran Muhammad, the director of the Schomburg, Professor William Jelani Cobb, and activists Darnell Moore and Claudia De La Cruz —created a sounding board on such topics as aggressive police tactics and community organizing. They also discussed implications of antagonistic police occupation and what it means for black and Latino neighborhoods. The panelists’ unique perspective on gender, civic engagement with the police, police brutality, as well as personal anecdotes on their time spent in Ferguson, all made for an insightful talk.

Cobb, who runs the Africana Studies Institute at the University of Connecticut, placed the issue of police misconduct into historical context. "I remember being here in 1998 talking about Amadou Diallo.” "And what we were going to do about that situation."

Amadou Diallo was an unarmed African man who was shot at 41 times and killed after police officers mistook his wallet for a gun. That 1999 incident sparked national outrage.

During the night’s discussion, the panel offered solutions for saving black lives at the hands of the police. De La Cruz offered this: "One of the things that has worked with my organizing experience working with young people is providing the resources."

Many in Harlem feel fatigue for having to bury their young due to police violence. But the night’s discussion allowed those in attendance to channel their emotions into hope and action.