A Walk in El Barrio 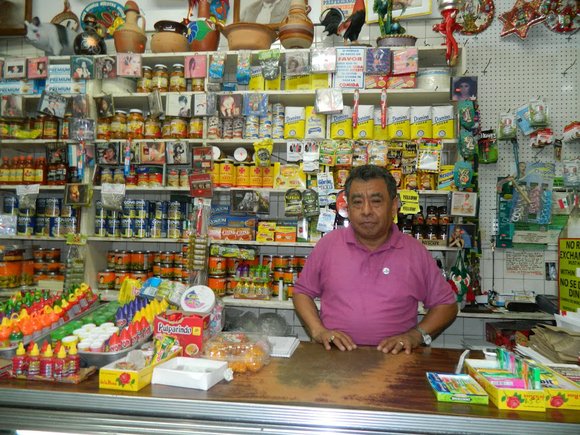 September 15th marks the beginning of the Hispanic Heritage Month, “El Més de la Hispanidad.” What better way to celebrate than a stroll through El Barrio?

Beginning with the Taino Towers, watch, they stand tall with the Puerto Rican flag flapping vigorously along side the American flag. As you find your way into the main streets of El Barrio, you will be bombarded with bodegas selling products from Salvadorian cheeses, Mexican piñatas and pottery, Goya products, to freshly made Dominican pastelillos. Even the Rite Aid pharmacy on the corner of 3rd and 118th Street wears proudly the festive colors of its community.

But do not stop, a rich gastronomy with an even wider selection awaits. The street vendors’ elotes- corncob seasoned with cheese, hot pepper, and mayonnaise-catch the eye. The cold aguas frescas hydrate and refresh. Rocia Vargas, one of the vendors, grew up in El Barrio has eight years vending. She talks about what to do during the Latino heritage month. “It would be nice if everyone was united,” Vargas says, “because sometimes Hispanics might fight each other and we can’t reach our goals that way.”

Once ready to move on, find a taco truck and stand in the line that forms as hungry pedestrians wait to place their order. Gonzalez, a 33-year-old Bronx resident waits his turn. “I come to El Barrio every chance I get for the food,” he says, “and for some Mexican products I can’t find in the Bronx.”

A small shop hides behind worn glass. El Barrio car service provides a safe and fast way of transportation. A pleasant smell lavishes from the flower shops that align along 116th street and the barbershops beam with business.

Once on 2nd you might find Mexico Lindo Grocery. The spacious store sells any kind of pottery crafts imaginable, traditional clothing, and freshly baked bread. Imported produces cover every inch of space visible. Francisco Garcia, the owner (pictured), stands behind the counter. “I respect everyone, and everybody respects me,” he says. “It’s nice that one can go anywhere and the people greet you and everyone knows who you are. Hopefully it will continue like this.”

As you walk over to 117th street and 2nd, look up to a special mural. It reads “A world where many worlds may connect.”