Hofstra Aims for Another Championship 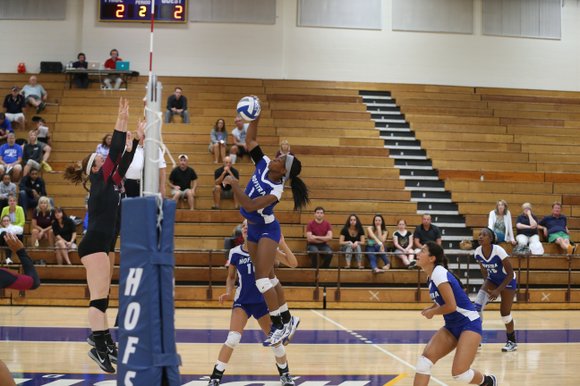 “We’re off to a good start with this new coaching staff,” said Adama Aja, a middle blocker on Hofstra’s volleyball team, which is currently 9-2. “I’m really excited to continue into conference. I won a [conference] championship my sophomore year. I’m excited this year that hopefully I can win another one with my team.”

Now in her senior year, Aja has found Hofstra to be a great fit both academically and athletically. She is premed and plans to go to medical school and become a pediatrician. Tackling premed courses while playing a Division I sport has been difficult, but Aja said finding the right balance between studying and training makes it possible.

“It’s a big time commitment, but it’s definitely going to be worth it in the future for me, and I’m really passionate about it,” said Aja. “I’m focused on getting the science prerequisites finished so I can start applying and doing the MCAT and all that entails, but at the same time still being focused on volleyball.”

Aja grew up in an athletic family. Her older brother played basketball at East Carolina and her two younger brothers are currently playing basketball with an eye to playing in college. Sports have helped them stay disciplined and focused.

“A lot of people aren’t really used to having so much to do in a short amount of time,” Aja said. “Medical school is something that you have to have the right amount of focus and the drive for. I already have that type of quality within me. I always want to succeed. That’s instrumental when I continue academically.

“That sets me apart from a lot of people,” she added. “I’m able to balance between academics and athletics and have a leadership role, which is also instrumental in the medical school process and on to being a doctor.”

Aja has grown into her leadership role. She’s a good communicator and thrives on helping underclassmen make the transition to playing in college and assisting other teammates in overcoming struggles. “Bringing a lot of energy during games and practices, and keeping that level head we need on the team,” she said.