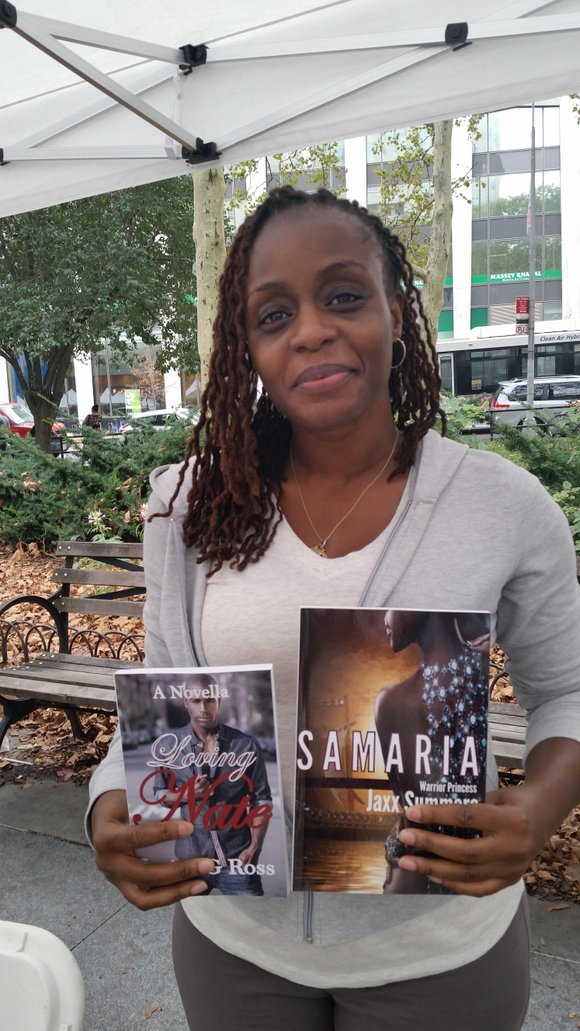 But the festival’s largest and most recognized event was the gathering Sunday, Sept. 21, which featured a sprawling display of booths and discussion panel stages from Downtown Brooklyn’s Cadman Plaza all the way to Brooklyn Borough Hall’s plaza space. Many people commented that the festival seems to be attracting more participants every year. The event has proved to be an excellent draw for African-American authors looking to increase their followings among avid readers.

Bryan Collier in front of his illustrations.

“I found out about the Brooklyn Book Festival actually online, because I live in Delaware and there isn’t too much of this sort of thing going on in Delaware,” author Janice Ross explained as she stood at a booth selling copies of her nine published books. “I’ve always loved New York—and Brooklyn, in particular—for the culture and for the blend and mixture you have here, so I decided this was the place to be.”

Ross, who also writes paranormal fiction under the pseudonym Jaxx Summers, explained that she writes about family, relationships and culture. “I try to not only tell a story but also to tell a tale that others can learn from,” she said. If it’s in one of my cultural series, then it’s about a journey—about people learning the history of a country, as well as enjoying a good read. If it’s about a relationship, then the relationship includes lessons learned—the heartfelt things that people will learn.” Ross has self-published her works under the imprint Cultural Cocktails, a name she chose because her emphasis on writing about culture is for her “like having a good cocktail—kicking back and enjoying it, just like you would do while enjoying a good book.”

Tina M. Brown said she found out about the Brooklyn Book Festival from Janice Ross. She came into Brooklyn from Pennsylvania and sold copies of her latest book, “Struggles of the Women Folk” (Createspace, 2013), a work loosely based on stories that her grandmothers told her. “The majority of my sales come from events like this, but I also do speaking engagements, just to get the word out about my work,” Brown said. In this, her third book, Brown said she writes about a young Black girl named Georgie, who grows up in southern Virginia during the 1940s and tries to make a better life for herself. Georgie has to confront prejudice and poverty, and the book takes readers on her journey as she navigates life. 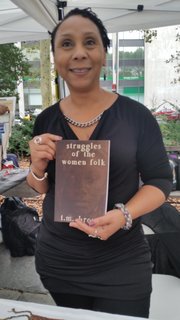 T.M. Brown holding her book “Struggles of the Women Folk.”

Brown said she’s had a terrific response to “Struggles of the Women Folk,” as well as to her other works. She says this is what has led to her writing and networking more with people like Ross. Ross, Brown and four other authors recently collaborated on a collection of short stories called “Just Between Us—Inspiring Stories by Women” (Calidream Publishing, 2013), which is available as a free download on the Internet. “Just Between Us” has been in the top 10 on Amazon and Kindle in multiple categories for almost a year. “All of that kind of reaction has just spurred my enthusiasm to continue to write,” Brown said.