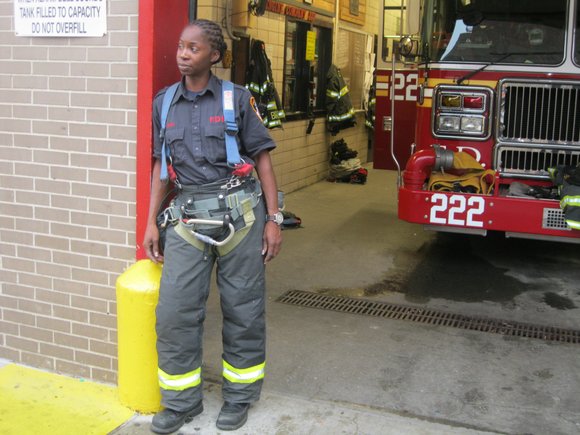 Last week at the Christian Cultural Center in Brooklyn, alongside 55 other FDNY members, Tracey Lewis became the second Black female firefighter to be promoted to lieutenant in the department’s history.

Born and raised in Flatbush, Lewis was always fascinated with firefighters. “As a child, I was intrigued with the FDNY,” Lewis told the AmNews the night before the ceremony. “I would always watch the fire engines race down the street and be in awe of the man driving the back end of the truck, the tiller rig. I always said that I would be a firefighter.”

In college, Lewis was a member of the second FDNY cadet program, and after a two-year stint as an EMT, she became a firefighter, serving proudly for 14 years. “Being a Black female firefighter definitely does not come without its challenges,” said Lewis. “It wasn’t a question if you were able to do the job. There were many that thought that I couldn’t handle the job just because I was a female.”

With women making 0.4 percent of the force, African-American women are under-served in an already marginalized group. In 1982, when the first women firefighters were hired, 11 out of 41 were African-American. Joann Jacobs of Queens was the first of the 11 to be promoted to fire marshall in 1992. Nearly 10 years later, Ella McNair of Brooklyn, now retired, was the first to be promoted to the rank of lieutenant.

“I stand on the backs of those whose came before me,” said Lewis, who is a member of the Vulcan Society. There are only 40 women in a force of nearly 10,400 FDNY firefighters. Only nine are Black. In this tight-knit group, Lewis forged a close bond with her mentor, McNair, and they shared more than one thing in common: McNair retired from the same battalion where Lewis received her promotion.

“McNair and all the women before me inspired and motivated me through their experiences, I am proud and honored to receive this promotion,” said Lewis. “When I think of everything that we and those before us have gone through, it makes all of this bitter sweet.”

Lewis added that allthough there has been progress in the FDNY, more can be done. She will now be responsible for all of the firefighters who work at Battalion 37 in Bedford-Stuyvesant, Brooklyn.

Earlier this year, Mayor Bill de Blasio agreed to pay more than $98 million, including $6 million for lost medical benefits, to approximately 1,500 Black and Hispanic former FDNY applicants and current firefighters, which resulted from a Vulcan Society lawsuit. A federal judge ruled that “from 1999 to 2007, FDNY used written examinations with discriminatory effects. These examinations unfairly excluded hundreds of qualified people of color from the opportunity to serve as New York City firefighters.” This year also marked record numbers of diverse firefighters joining the ranks of “New York’s Bravest.”

“Lt. Lewis has truly made history,” Vulcan Society President John Coombs told the AmNews. “She is the only Black woman in a supervisory position in the FDNY. I hope her promotion sends a message that young Black men and women are capable of holding leadership roles in every occupation in our workforce.”