Climate is the name of the game: Marchers takes over NYC 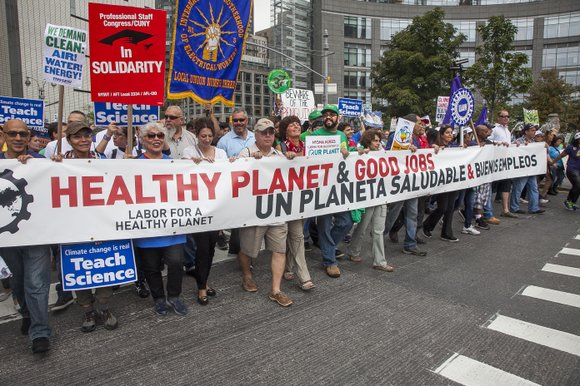 Climate is the name of the game: Marchers takes over NYC Clarence Elle-Rivera

Union leaders, environmental activists and concerned citizens took to the streets of Manhattan Sunday for the People’s Climate March, one of the largest marches about the climate in history. Similar marches were taking place in 166 countries around the world.

Starting late Sunday morning, marchers were out in full force, including members of DC 37. The union’s executive director, Lillian Roberts, discussed the importance of marches such as this one.

“DC 37 was one of the first unions to endorse the People’s Climate March,” said Roberts in a statement. “For us, climate change is not an abstraction. In 2013, many of our members were victims when Hurricane Sandy flooded streets and subways, damaged homes and destroyed communities. Then we were forced to close DC 37 headquarters for over eight months and redeploy staff to other locations. Still, in spite of the devastation, our dedicated city workers reported to duty as 9-1-1 operators, EMS first responders, sewage treatment workers, librarians, school aides and more, so they could keep fellow New Yorkers safe.

Climate is the name of the game: Marchers takes over NYC

“Working families and the most vulnerable are often among those hardest hit by climate disasters. Our members and countless other workers risk their lives to help victims, repair infrastructure and provide essential services in their aftermath. We are sending a message to our city, state and federal elected officials to take the necessary steps to decrease global warming pollution. They must act now!“

The march coincided with the arrival of 120 world leaders, including President Barack Obama, in New York City to discuss the topic of carbon pollution at the United Nations. A recent study found that in 2013, the world had spewed more carbon dioxide into the atmosphere than ever before, with most of that driven by China, India and the United States. China did not send a representative to the United Nations this week.

But none of that concerned workers from 1199 SEIU, who were marching downtown to advocate for better environmental care. Several explained why they were participating in the march.

“When Superstorm Sandy hit, our nursing home in the Rockaways lost power,” said Myrtle Williams, 1199 member and a licensed practical nurse, in a statement. “It was a scary experience, but I had to be strong for the residents. That’s why I’m proud 1199 members are taking a stand and participating in the People’s Climate March.”

“When I saw the devastation that Typhoon Haiyan created, I joined my coworkers to raise money for the relief effort,” added registered nurse and 1199 member Gloria Yousef in a statement. “But more has to be done to prevent future storms. That’s why I joined the People’s Climate March.”

“I marched because my family is from an area of the Philippines that was devastated by Typhoon Haiyan,” said 1199 member Celerina Sarmiento. “Thankfully, all of our loved ones survived, but their homes were destroyed. We can’t allow this to continue.”