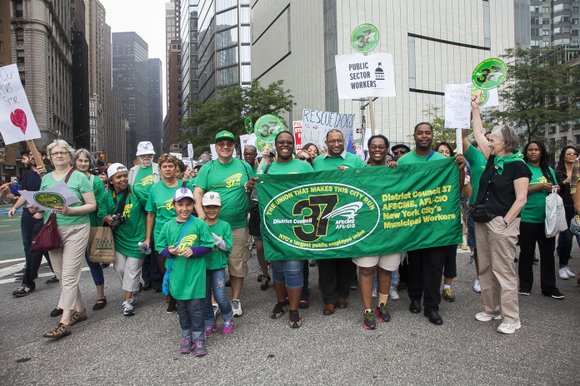 Climate is the name of the game: Marchers takes over NYC Clarence Elle-Rivera

New York streets were overflowing Sunday with hand-made posters, buttons, baby carriages, bicycles, musical instruments and nearly 400,000 marchers demanding an end to the exploitation of fossil fuels such as oil, coal and natural gas that are creating havoc for the environment in the U.S., Africa and most of the world.

Marchers came by train from California, by bike from Maine and Vermont and from the four corners of the globe for a weekend that began Friday with conferences and workshops in the city’s community gardens. Events also took place in Burundi, Tanzania, Nigeria and South Africa among others. The Twitter handle was #WeLeadYou.

Beninese singer Angelique Kidjo was among the indigenous leaders at the head of the march. She spoke about what makes climate change an issue for her at home.

“I was born in Benin, West Africa, and raised there,” she said. “Every time I go back, all the time I hear from the women that sell their goods in the market how hard it is for them to have more goods to sell because the climate is changing, and the tomatoes don’t ripen at the same time.

“Who is paying the price of climate change? The women of Africa. They are the ones that cook the food. They are the ones that make the balance between the family, the community and their own children … The scarcity of food is also linked to climate change. How are we going to feed the next generation? Agriculture is becoming more and more complicated. We have so much drought. We don’t have the food that we need, enough food to sustain our life.”

Kidjo was backed up by Samuel Hinneh on the website Ghanaweb, who cited the words of a small farmer: “Crop production has reduced considerably over the past years. This is mainly due to the unreliable patterns of weather. Rainfall has become something difficult to predict. The seasons we expect the rain to come, it does not. In some situations, when it does come, it results in floods.

“With increasingly onset of activities destroying the Earth via climate change, food production may become difficult to take place due to low rainfall, as well as soil nutrients.”

This week, global leaders are gathering at the U.N, for the Climate Summit, and agriculture is key on the agenda.

Commenting on the website Go Fossil Free South Africa, the Rev. Desmond Tutu stated, “People of conscience need to break their ties with corporations financing this injustice of climate change.”

“Those who are creating the climate crisis are the ones who are least affected by the outcomes, by the impacts,” said Nnimmo Bassey, a member of the Climate Justice Dialog. “Global warming is a wakeup call to go back to the principles of living together in solidarity, in harmony with each other and the planet.”

Upcoming events will be posted on www.peoplesclimate.org.