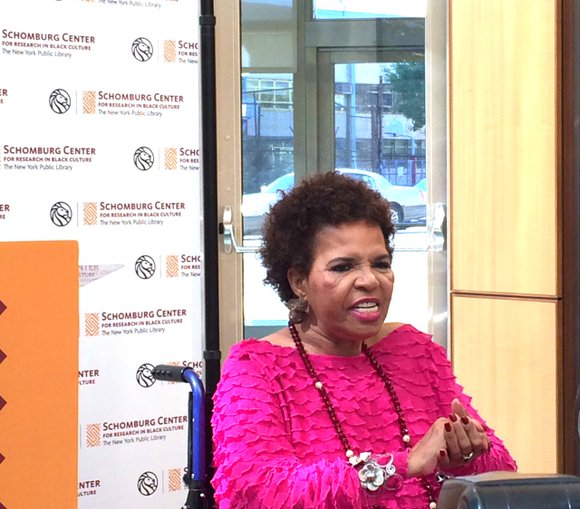 The last lines of Ntozake Shange’s epic choreopoem, “For Colored Girls Who Have Considered Suicide When the Rainbow Is Enough” read: “i found god in myself & i loved her/i loved her fiercely.” That was the inspiration for the name of the ambitious three-gallery, 47-artist exhibition entitled, “i found god in myself.” The diverse art works feature yarn, buttons, glass, photographs, paintings, videos and even a bathtub.

Curated by art aficionado Souleo, “i found god in myself” commemorates the 40th anniversary of the first performance of “For Colored Girls.” At a special media tour at the Schomburg Center for Research in Black Culture (one of the three featured galleries), Souleo talked about why he thought his idea needed to be executed and specifically at the Schomburg.

“The Schomburg was perfect because they have some of Ms. Shange’s papers and also because of the richness of the history here,” explained Souleo. “There’s a commitment to diversity and humanity and overcoming the oppressors, even those within ourselves. This work has been done on stage, spoken word, film, off-Broadway and Broadway. But this is the first time that this has been done with visual arts, and the work is ripe for this because of the richness of the language and the metaphors and similes and very exact descriptions.”

The Schomburg’s director, Dr. Khalil Muhammad, talked about the importance of Shange’s work. “Ms. Shange’s work has transformed the lives of women from around the globe,” said Muhammad. “I can’t help but think of the importance of this moment on the short heels of the passing of Maya Angelou, whose work ‘I Know Why the Caged Bird Sings’ in 1969 helped to open up a world view and perspective of women and the challenges they face with sexual abuse and violence. Ms. Shange is a bridge between that moment and the young Pakistani girl, Malala, whose work talks about the struggles of Pakistani girls being oppressed and not being educated more than 40 years after ‘I Know Why the Caged Bird Sings.’”

Souleo commissioned 20 art pieces for the Schomburg gallery, one for each poem in “For Colored Girls.” One of the featured artists is Dianne Smith. Her work for this exhibition is based on “somebody almost walked off wid alla my stuff,” a poem about a woman who is explaining how she had to regain her identity after a rough break-up. Smith’s piece takes up an entire wall and features yards of fabric and three video screens that show Smith and women she knows talking about the giving and taking of “stuff.”

“This notion of ‘stuff’ being carted away is a recurring theme growing up as a little brown girl and turning into this Black woman,” said Smith about the significance of the poem and how it inspired her artwork. “But it’s not just my lived experience. From watching the women in my family move through life, any one of these poems could be attributed to those experiences. But I think this one in particular was really poignant.”

In an exclusive interview with the AmNews, Shange spoke about why she thinks her work has resonated with and inspired so many people over the decades. “Unfortunately, the circumstances of Black women and girls haven’t improved in the last 40 years,” she said. “They’re challenging our reproductive rights, we don’t have a minimum wage, and we don’t have equal pay for equal work. There’s more violence against women these days than there was 40 years ago, so that all means being bombarded with cruelty and ignorance. That situation propels some women to investigate my work and seek solace and hope in some of the stories and recollections in the piece.”