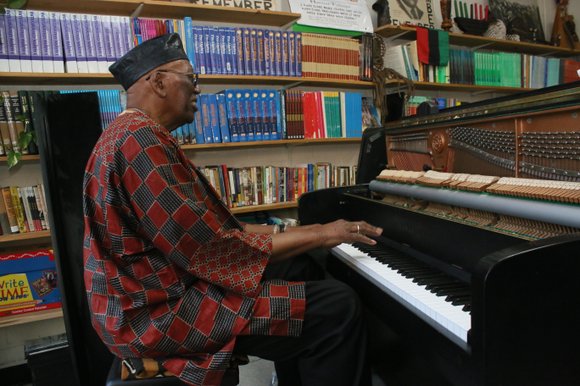 Having arrived from South Africa days ago, Jazz Master Randy Weston still found time to perform a free concert for the students of Sankofa International Academy in Bedford-Stuyvesant Saturday.

“Everywhere we go on the planet, we bring the African music with us. I am an African from Bed-Stuy,” said Weston, the gifted pianist, composer, bandleader, activist ambassador and griot, who is proud to be a native of Bed-Stuy. He went to school at Boys High and remembers all the great jazz musicians he met at the home of Max Roach on Monroe Street in the Bed-Stuy community.

He told the story of music from its original roots in Africa and acknowledged all the ancestors who helped develop his genius, from Langston Hughes to Melba Liston, Dizzy to Monk, Marshall Stearns to Cheikh Anta Diop and, of course, his piano teacher, who was paid 50 cents per lesson by his dad to teach him at the age of 3.

Weston, winner of the Doris Duke Performing Artist Award 2014, was awarded a grant to perform for seven schools in New York City, and one of his choices was Sankofa, a small, independent African-centered school in Bed-Stuy. With fellow artists TK Blue on alto saxophone and flute, Alex Blake on bass, Neil Clark on African percussion and Cynthia Scott singing the blues, they combined to create masterful teaching moments for the students.

The artists described their instruments and gave a historical background of the origin and usage. Walker, the talented jazz singer, told the students, “The first instrument was the heartbeat. It came before the voice and drumbeat, the blues is seven days of the week.” They learned that blues go back to Africa, which we hear in traditional music. They were told that we communicate through the blues, that we speak music with an African pulse, soul and drum that spans the 54 countries in Africa, each having thousands of groups and each group dozens of drums representing all the countries of Central and South America and the Caribbean.

Sankofa’s students contributed to the evening’s success by first having Malik Gibson, using a display chart, give a rousing presentation on Weston’s life. He concluded by presenting him with a copy of his research paper. Students paid tribute to the ancestors by reciting the names of the 54 nations in Africa, 50 states in America and a pledge to the ancestors “to be the best that they can be.”

Former student Gene Johnson Jr. and his parents gave heart-piercing tributes. With tears of appreciation rolling down her cheeks, Johnson’s mother said, “I thank Sankofa, especially Director Ollie McClean, for saving my son. Traveling from the Bronx to Brooklyn twice a day was worth the investment.”

Twelve-year-old Brianna Browne said, “This was an excellent performance. It had different types of music and instruments, jazz, blues, Caribbean music, and it all started in Africa!” The children’s excitement and level of engagement was a testament to the brilliance of the artists and their leader, and the relevance of the music to their culture and history.

Offering his final words of advice to the students, Weston said, “Young people, we need you more than you need us. We are a spiritual people who love to give, and sometimes we give to our detriment. We give the African sunrise, but a master musician must also be able to make people laugh, and I wrote about Bed-Stuy in ‘African Village Bed-Stuy.’”

There was a birthday cake for Weston and a handmade flower presented to his lovely wife, Fatou, by Zevadiah Edmund, a student. Everyone left floating on clouds, suspended by the African rhythms.