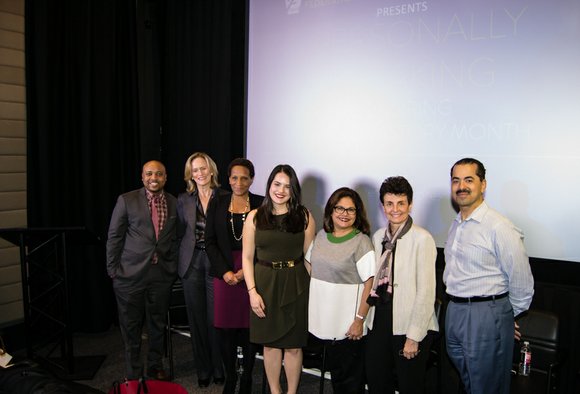 Sponsored by American Express, the evening’s distinguished panelists included Ana Oliveira, president and CEO of the New York Women’s Foundation; Lisa Garcia Quiroz, senior vice president of Time Warner Inc., and president of the Time Warner Foundation; Rosemonde Pierre-Louis, commissioner of the New York City’s Mayor’s Office to Combat Domestic Violence; and Susan Burden, MSW. The event was moderated by Christine Murphy, co-founder and COO of New York States of Mind. Guests filled the screening room at the Bryant Park Hotel to hear from a panelist of women leaders, many of who were the “first” in various aspects of their professional lives, to learn about the value of diversity, the importance of female empowerment and being an agent of change.

“These women were ‘the first’ in many ways,” said Jennifer Jones Austin, CEO and executive director at FPWA. “Now they are leading the world of philanthropy and passing the torch to other young women, inspiring them to make changes they want to see and proving the value of diversity.”

That was a sentiment echoed by Pierre-Louis, who said, “It’s about passing the baton when you’re the first.”

A common theme throughout the night was diversity and inclusion. Garcia Quiroz reiterated, “We all have our heroes … It’s hard for a child to imagine what they could be if they don’t see themselves represented. We’ve gotten to the acceptance of diversity, but we need to move to the value of diversity.”

Oliveira talked about the importance of women and all lives mattering in social justice and philanthropic work. “If we live in a world where Black lives matter, all lives will matter,” she said. She shared how important social justice work is for women from all walks of life. This was backed up by Burden, who honed in on the issue of elder abuse, which surpasses many other forms of abuse.

FPWA is an anti-poverty, policy and advocacy nonprofit with a membership network of nearly 200 human services- and faith-based organizations.