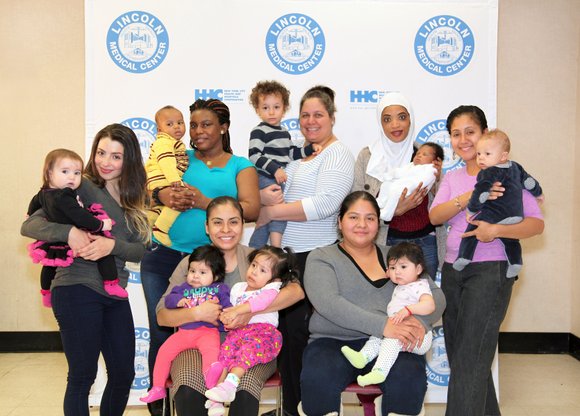 Members of the Lincoln Breastfeeding Club

Lincoln Medical Center, located at 234 E. 149th St. in the Bronx, became the first hospital in the Bronx to be designated “baby-friendly.” The hospital initiative is sponsored by the World Health Organization and UNICEF, and recognizes hospitals all over the world that support and protect breastfeeding mothers and their babies. In 2014, Lincoln Medical Center had 2,267 births, with 93 percent of the mothers initiating breastfeeding at the facility.

In 2007, the New York City Health and Hospitals Corporation was awarded a grant from the New York City Department of Health to help hospitals work toward the baby-friendly designation. The grant kick-started the integration of breastfeeding education into the nation’s largest public health care system. Harlem Hospital Center was the first baby-friendly hospital in New York City, and Lincoln’s maternal and child health care initiative is the first in the Bronx and the third in a Health and Hospitals Corporation hospital. Only eight hospitals have this designation in the state of New York.

A multimillion-dollar capital investment expanded Lincoln’s labor and delivery suite in 2009, and allowed for renovations that included modernizing the adjacent postpartum, neonatal and nursery units and creating designated breastfeeding rooms, available 24/7 for mothers with newborns, including employees. Mothers and their newborns are no longer separated after birth unless required by a medical indication. Since 2013, mothers and babies “room-in” together, and family can stay longer with them.

In 2014, Lincoln Medical Center received the International Board Certified Lactation Consultant Care Award for this dedication to breastfeeding and for excellence in lactation care. Although not necessary for the baby-friendly designation, it demonstrates the commitment to fully embrace the provision of information, confidence and skills that mothers need to successfully breastfeed.

Baby-friendly designation distinguishes birth facilities that offer mothers the information, confidence and skills needed to successfully breastfeed their babies. Milton Nunez, executive director of Lincoln Medical Center, said in a statement, “Promoting the benefits of breastfeeding and supporting mothers in breastfeeding is a key focus at Lincoln. The baby-friendly designation demonstrates our strong commitment to the best possible breastfeeding support for mothers, infants and their families. We are extremely proud of the collective work of our staff in achieving this prestigious recognition and for the benefits it represents for the Bronx.”

Fatoumata Ouedraogo, when asked what made her decide to breastfeed her son Achraf, stated, “It is important for my baby and for me. It protects us both and attaches the mother and baby to each other. It makes the baby intelligent. He can breastfeed for as long as he wants!”

The baby-friendly designation is given after a rigorous on-site survey completion and is maintained by continuing baby-friendly practices and passing reassessment every five years.