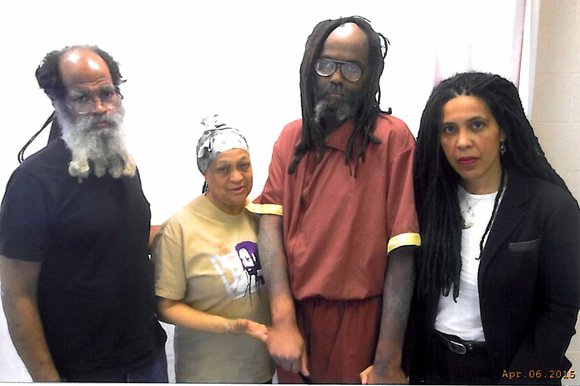 Suzanne Ross, a veteran activist and longtime stalwart in the fight for the liberation of Mumia Abu-Jamal, was among a contingent of supporters who traveled to the Pennsylvania Department of Corrections in Mechanicsburg, Pa., Monday to continue to demand that the stricken Abu-Jamal get his own independent doctors for his medical and nutritional needs.

Abu-Jamal, a renowned political prisoner who was rushed to the hospital last week after going into diabetic shock, remains very sick, according to Ross. “Three people were able to visit Mumia, who is still in the infirmary at Mahanoy … and in a wheelchair,” she said. “He continues to be fed a diet that can only get him a lot sicker—pasta last Thursday night for dinner and cake, in addition to oatmeal yesterday [Monday] for breakfast.”

Ross said that Abu-Jamal told her that he was just one among many in the prison, some 100 men who line up each day for their diabetes medication. Abu-Jamal’s blood sugar had risen to a dangerous level of 779 mg/dL when he was rushed to the Schuylkill Medical Center last week. “Yesterday,” Ross related, “it was 336, clearly requiring urgent and proper care.”

But despite his physical weakness, Ross continued, Abu-Jamal appeared extremely sharp mentally and his spirit remains strong. “He desperately needs independent medical treatment by specialists outside the prison system,” she added.

Secretary of Corrections John Wetzel refused to meet with Ross and the supporters, many of whom, like Ross, had driven nearly 200 miles to register their complaint and demands. In fact, he had his security forces escort them out of the building. “They tried to get us to go to a ‘staging area’ outside the building,” Ross said, “but we chose another area instead. Security called the local police, who sent four cars to deal with 15 of us.”

Meanwhile, Abu-Jamal’s wife, Wadiya, has been undeterred in her outrage about her husband’s condition. “Enough is enough!” she said in an email. “Today [April 5] is my birthday. April 24 is Mumia’s 61st birthday. But today my husband is in critical condition in a cell in the infirmary at SCI Mahanoy. We need Mumia free and home!”

In very passionate terms, she explained how and why her husband has been incarcerated since 1981 after his conviction resulting from a fatal confrontation with the police in Philadelphia. “He is innocent in the murder of police officer Daniel Faulkner and the cops on the scene all knew that,” she continued. “But Mumia was convicted for a murder he did not commit and sentenced to death.”

For more than a generation, Abu-Jamal languished on death row, until 2012, when his sentence was changed to life in prison. “He was caged 24 hours a day,” she said, “in his cell and even when outside. In general population these past three years, he has yet to receive his correct diet. He developed a skin disease that spread over his entire body, treated with the wrong medicine that he was allergic to, had pneumonia and last Monday, March 30, he went into diabetic shock.”

Wadiya Jamal and a growing number of supporters believe that the outcry from the community has been effective in bringing attention to Abu-Jamal’s plight. However, they insist that much more has to be done and request that concerned citizens contact SCI Superintendent John Kerestes and John Wetzel and let them know of the demand to have a diabetes specialist examine and treat Abu-Jamal.