A glorious celebration for the life of Dr. Ben 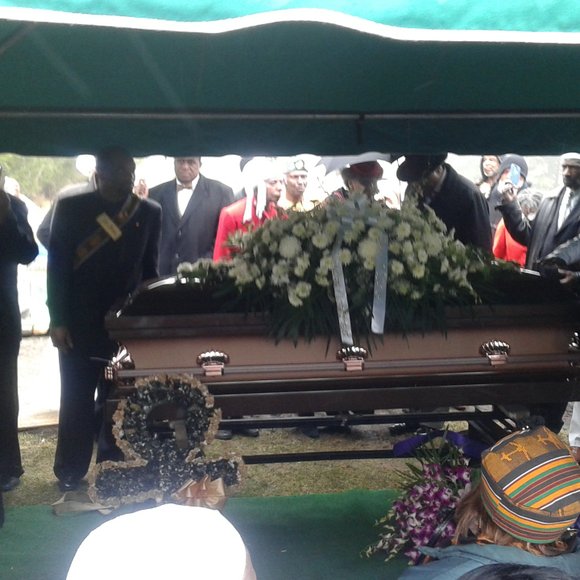 While there is no dismissing the glorious encomiums for the late Dr. Yosef A.A. ben-Jochannan—and they were as full of praise as the many dispensers—the priceless item at his more than three-hour funeral service at the Abyssinian Baptist Church in Harlem was the printed program. One thing was certain upon being lucky enough to get one was the prediction that they would not have a sufficient supply for the massive turnout.

An even safer prediction was that many of the hundreds of admirers of the great scholar would not be able to get in the church in the first place, and like the overflow crowd at the wake and viewing on Thursday, many had to settle for the celebration outside the church at the end of the services. 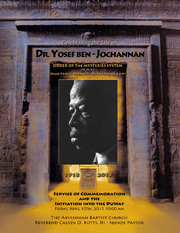 Professor James Small had the awesome responsibility of moderating the “service of commemoration and the Initiation into the Duat,” as the ceremony was called. Looking at the long list of speakers, performers and proclamations he advised the participants that “you have two minutes for your remarks,” he said, “and only Dr. Jeffries can have an extended African two minutes.” It brought the expected laughter from a packed church, especially from those familiar with Dr. Leonard Jeffries’ long, history-laden speeches. And later he and his wife, Dr. Rosalind Jeffries, would speak in tandem, both stressing an “African identity” and keeping to the limits.

“Dr. Ben is not gone, he’s right here,” said veteran activist and cultural maven Camille Yarbrough during her delivery of the libations. She asked the audience to “just breathe” deeply and reflect on Dr. Ben’s spirit.

After the collective breath was exhaled, Minister Akbar Muhammad was called to the podium and, for the most part, he read a message from Minister Louis Farrakhan, the leader of the Nation of Islam. It was a message of unity and solidarity with understanding that Dr. Ben was a historian “from whose lessons we can learn from the past.”

Listening to someone read from the Book of Vindication must have been a first time experience for most of those in attendance. And it was during this reading that “Mut the mother of heaven” was mentioned and “heaven” would be almost a running gag for the rest of the ceremony, particularly where it was variously located by different speakers.

Professor Small, a leopard skin print draped over his shoulders, kept things moving at a good clip, and often dropping his own observations of his mentor. “Dr. Ben gave us the foundation to understand our eternity,” he remarked before asking Rev. Dr. Calvin Butts, III to read the obituary. Among the highlights of Dr. Ben’s enormously productive 96 years—he joined the ancestor on March 19—Butts recalled was that he was a versatile genius who wrote more than 40 books. “He will be remembered as a brilliant historian, committed to the uplift and enlightenment of the global African community. He will also be remembered as charismatic with an enormous sense of humor. And at the same time, as being straight, forthright, and even confrontational if he detected lies, deceit, or falsehoods.”

Rev. Butts then departed from the written obituary to recount an incident at the church many years ago when Dr. Ben used to teach there. He said that Dr. Ben was addressing a class of ministers when he explained to them where heaven was, something that Dr. Ben often commented on in the twilight of his career without fudging on that location of the female anatomy. Butts also offered an editorial aside when he mentioned that Dr. Ben leaves to mourn him 40 grandchildren. “He was an African,” Butts chuckled.

That moment of reverence and lighthearted memory of Dr. Ben was followed by the music of T.K. Blue on flute and the magisterial piano of Randy Weston. Blue explored every lovely sound of his instrument, giving it a dynamic quality as his melody wove in around Weston’s tremolos and swift arpeggios. Dr. Ben’s attorney Rudyard Whyte laid out similar chromatics with a list of names of those who had not been mentioned before, none more significant than Reggie Mabry and his tireless work and devotion to Dr. Ben.

A proclamation was delivered by State Senator Bill Perkins; Attorney Michael Hardy was there to represent the National Action Network, and they set the stage for Adelaide Sanford, who admitted that “I am one who learned from Dr. Ben.”

Dr. Ben’s title was given a different turn by Imam Al-Hajj Talib Abdur-Rashid, who treated it in medical terms and how “all of us” were patients to the peerless Egyptologist. His Islamic expression, rendered in Arabic and English, melded nicely with the sweet Spanish enunciations of Dr. Georgian Falu, who, among her many academic duties, has translated some of Dr. Ben’s works into Spanish. And she announced that the foundation in Dr. Ben’s name “has been established.”

Thus, whether in English or Spanish, or through the foundation, Dr. Ben’s legacy is secure, a fact underscored by Minister Abdul Hafeez Muhammad of the Nation of Islam, who also read a statement of condolences from Minister Farrakhan.

“Dr. Ben was a grand master teacher,” asserted Ashra Kwesi, and his words resonated like Bobbi Humphrey’s flute during her rendition of “Amazing Grace”; and memories of the phenomenal teacher was poignantly invoked by Tony Browder who, in his presentation, remembered the moment at Dr. John Henrik Clarke’s funeral when Dr. Ben said, “I have lost my best friend.”

There were more proclamations and resolutions, including one from Congressman Charles Rangel and the Blue Nile organization, after which Butts noted that part of Dr. Ben’s funeral expenses had been paid by the Rev. Al Sharpton. Donations also came from David West of the Indiana Pacers; photographer Chester Higgins; Black Classic Press, which has reprinted several of Dr. Ben’s books; and the Association for the Study of Classical African Civilization (ASCAC), an association Dr. Ben helped to found and whose many members were dressed in white for the celebration.

One of the heartfelt moments came from Dr. Ben’s eldest son, Afredo, who compared his father to Harriet Tubman because of a fearless commitment to rescue those in bondage from the bowels of the South. Dr. Ben, he said, did his share of rescuing.

An equally moving moment occurred during the Initiation of the Duat Ritual, with Professor Small presiding with a wave of his hand over the open casket and giving Dr. Ben a final opportunity to speak through the Opening of the Mouth ritual. This was reminiscent of an ASCAC member’s words when he said, “Dr. Ben opened his mouth, so we could open our minds.” Both Vera and Wade Nobles were among the long term scholars associated with Dr. Ben whose minds were wide open, and they deemed him an inexhaustible “man of resource.”

And a few hearts and ears were opened when Eunice Newkirk delivered her powerful version of “His Eye is on the Sparrow,” and a multitude of eyes were on the casket as it rolled from church to the streets where a large contingent of celebrants were waiting, some of them prepared to escort Dr. Ben to his final resting place at Ferncliff Cemetery.

Dr. Ben used to say that as long as someone’s name is mentioned “they will never die,” and while it may be difficult to obtain a copy of the funeral program, it’s a good chance that Dr. Ben’s name will reverberate into eternity.