Figure Skating in Harlem shoots for the stars 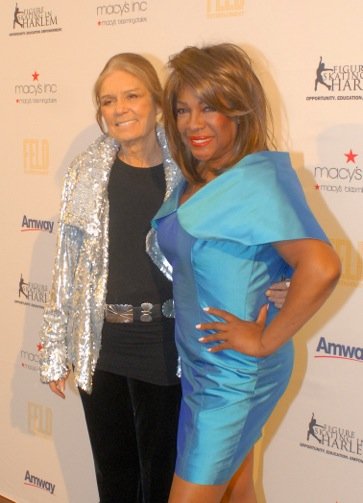 To celebrate its 18th anniversary of existence and 10th anniversary of fundraising galas, Figure Skating in Harlem moved off the ice at Trump Rink in Central Park to a new venue, 583 Park Ave. “Skating With the Stars” transformed into “Dancing With the Stars,” as there was a dance floor and attendees were encouraged to dance with the star skaters and dancers in attendance.

This year, FSH honored feminist icon Gloria Steinem, Olympic gold medalist Evan Lysacek and Feld Entertainment’s Nicole, Alana and Juliette Feld. Because there was no skating, FSH students prepared two spoken word performances, during which they reflected on what FSH means to them and paid tribute to Steinem.

“I got to learn about her activist movements, feminism and how she empowered women to be who they want to be in the world,” said Cheyenne Pommelle, 17, who has been with FSH for six years and heads to college in the fall.

Founded in 1997 by Sharon Cohen, FSH serves girls ages 6 through 18 in the Harlem community, combining on-ice skating at Riverbank State Park with academic tutoring. The program is now year-round, with spring and summer skating at City Ice Pavilion in Queens and a summer camp that includes academics.

During this past Riverbank season, off-ice study included a series of classes on science, technology, engineering and math, where women and people of color are underrepresented. A curriculum specialist worked with FSH skating director Lisa Blue to create lessons that views STEM through skating.

“We did different experiments,” said Jessica Richards, 16, who’s been in FSH for three years. “Our teacher inspired me so much. It was a different view that I’d never experienced before.”

Lysacek, 2010 Olympic figure skating gold medalist, has been involved with FSH for seven years, attending events and even coming to FSH headquarters in Harlem to meet with the girls. Olympic gold medalist ice dancer Meryl Davis performed a piece in tribute to Lysacek with Maksim Chmerkovskiy, her partner on the TV show “Dancing with the Stars” (they won season 18).

Cohen also shared a bit of upcoming good news. Whoopi Goldberg has named FSH as the charity she’s supporting in connection with her honor at Variety magazine’s “Power of Women New York” luncheon.