Noted women host 'For Sisters Only' panel at NAN convention 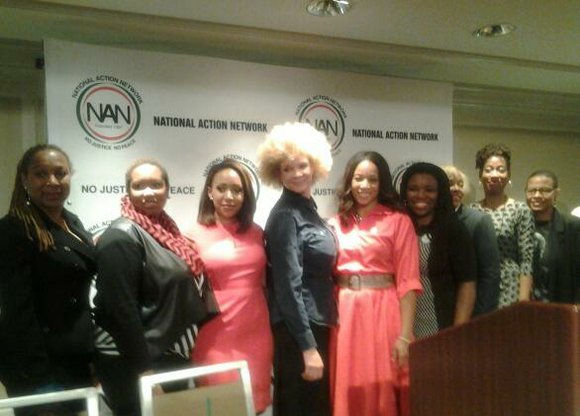 Several Black women who have made an impact in media, politics, and social organizations, came to the Sheraton New York Times Square Hotel on April 9 for a panel discussion titled “For Sisters Only: Securing Our Future.” The panel was a part of Al Sharpton's National Action Network three day convention, which ran from April 8 through April 11.

The panelists, which included founder and executive director of Black Girls Rock, Inc. Beverly Bond, CNN contributor and image activist Michaela Angela Davis, and founder of the Terrie Williams Agency Terrie Williams, talked about some of the challenges and struggles they have faced, as well as things that plague Black women. The discussion was moderated by Emmy award winning journalist Mara Schiavocampo.

Some topics of discussion were education, mental health, voting responsibility and domestic violence. However, the most discussed and important issue was having influential and positive women of color in the media for Black girls to look up to.

"Media plays a role in how we view ourselves." said Brianna Patterson, the northeast regional director of NAN Youth Move, and the youngest member on the panel at 21-years-old. This lead to discussions on teaching young girls that what they see on reality tv on shows such as "Love and Hip Hop" is not to emulated and teaching the importance of having better role models.

The panel discussion ended with audience questions, and one last reminder that mentoring young Black girls and having a positive, influential person in their lives is the best way to put them on the right path towards success.

"We have to tell our Black girls: we see you and we got you," said executive director of African American Policy Forum Dr. Kimberlé Williams Crenshaw. "We have to talk to our girls and figure out the narrative of the Black girl."