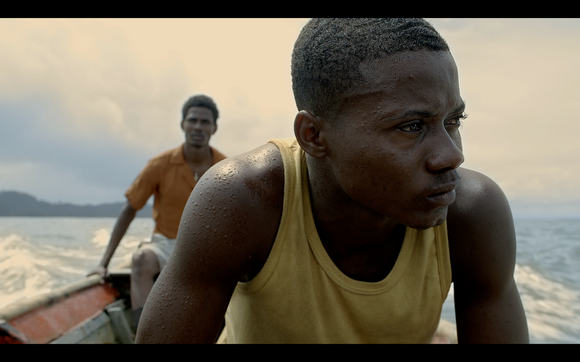 During the 2014 Tribeca Film Festival, director and screenwriter Josef Wladyka’s “Manos Sucias” won the award for Best New Narrative Director and an Audience Award. The film has opened in New York. “Manos Sucias” was executive produced by Spike Lee, who was also Wladyka’s professor at NYU.

“Manos Sucias” is written by Wladyka and Alan Blanco. The taut thriller explores the dangerous city of Buenaventura, Colombia, and is a harrowing tale of three men who embark on a journey over the dark, murky waters of the Pacific. A set of mysterious coordinates is their guide, a fishing net is their cover, and a narco-torpedo filled with 100 kilograms of cocaine is their cargo. Following estranged brothers as they risk everything for a chance at a better life, “Manos Sucias” takes a close look at life at the bottom of the food chain in the international drug trade.

AmNews: What were the biggest challenges in making this movie?

Wladyka: There were so many challenges to overcome while making this film, but one of the biggest was figuring out how to shoot in Buenaventura. Buenaventura is a city on the Pacific Coast of Colombia plagued with many social-political issues. Our core team, myself, Alan Blanco, Elena Greenlee, and Marcia Nunes, knew that if we were to make a film there, we had to come in with the right attitude and a certain sensitivity in order to be welcomed. There is no film infrastructure in Buenaventura, so we encouraged the people in the community to act in and crew on the film. What at first seemed liked a challenge turned into a beautiful collaboration with the people of Buenaventura.

As one of the most hot and humid areas in the world, the physical act of making this film was also another major obstacle. Filming on boats, through thick jungles, and in other rough terrain taxed us emotionally and physically.

Your producers are also from the NYU film program. What’s it like, as a director, to work with a good producer?

Good producers are such a crucial part of making a film. I had the privilege of working with Elena Greenlee and Marcia Nunes, two incredibly dedicated producers whose resilience in the face of challenges amazed me. They brought so much to the project, especially from a creative standpoint.

I always leaned on them not just for the logistical aspects of the film, but also collaborating with creative decisions. They both have great taste and have an extremely important quality that I think all producers need—they are honest. As a filmmaker you need people to be 100 percent honest with you all the time to keep you grounded. So much of the success of this film is credited to the two of them. They truly are badass.

How has your style changed since making the movie?

I’m not sure if my style has changed because I haven’t made another movie yet, but I hope it doesn’t change too much. I want to try to keep telling stories that are compelling, exciting and emotionally moving.