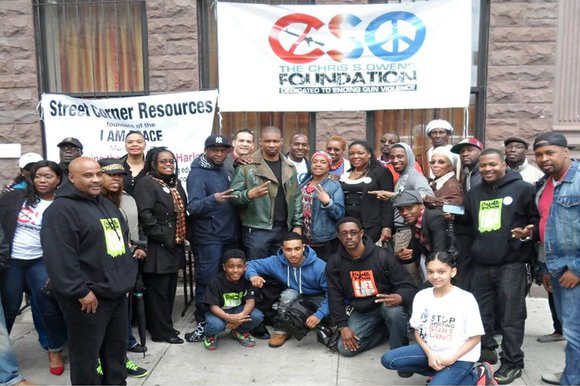 Chris Foye is surrounded by friends and supporters paying respects to his slain son, Chris Shakim Owens, who was 13. He was struck by a stray bullet in the summer of 2009. This Sunday, April 26 (noon to 2 p.m.), he will be honored at the corner of 121st Street and Adam Clayton Powell Boulevard in Harlem. The chrissowensfoundation.org is asking participants to bring pictures of loved ones lost to or injured by gun violence.

Bloody sidewalks and yellow crime scene tape must not be the most prominent images of summer 2015. Police and ambulance sirens cannot be the soundtrack. Bullet markers and wailing residents are already the go-to scene for primetime news.

This past weekend, with the last strains of a harsh winter replaced by rising temperatures, gunshots rang out in three New York boroughs: Brooklyn, the Bronx and Manhattan.

The Police Department classifies the weekend as Thursday midnight to Sunday midnight, and in that 72-hour span from Thursday, April 16 to Sunday, April 19, 21 shootings left three people dead and 23 people wounded.

Friday morning, Dawan Turner, 24, was shot in the head as he sat in a car, in Brooklyn’s hard 75th Precinct. On the same day, in what is described as a “revenge killing,” Dontea Bascom, 16, was shot dead, and his 13-year-old cousin injured, in Bed-Stuy’s Marcy Houses. With shots to the stomach and head, Steven McKoy, 30, was murdered in East New York Sunday. Saturday saw 10 shootings, with a 16-year-old boy shot in the leg in East New York and three people hit as bullets flew at the Castle Hill Houses in the Bronx. Sunday, six shootings in the Bronx, Harlem and Brooklyn left several males aged 19 to 40 wounded.

A trauma nurse at a Brooklyn hospital told the AmNews, “I am seeing these shootings every week. It is getting worse.” Saying that she had worked in the operating room on some of the recently publicized cases, she added, “One young man died in my arms. It is bad. These are all children. It is crazy, and it is tragic. It is awful. Kids. It is crazy, and it is every weekend. If it is not gunshot wounds, it is multiple stab wounds. If you saw the OR when we were done, you wouldn’t believe it. There is just so much blood. It is bad.”

Brooklyn DA Ken Thompson, while noting that violent crime in Brooklyn is down, pulled no punches when he told the AmNews, “As Brooklyn DA, I’m not only determined to go after the violent criminals who are committing these shootings but also those who are flooding our streets with all of these guns.”

Dozens of Brooklynites heeded the call and turned out Tuesday night, April 21, when groups such as the Brooklyn Anti-Violence Coalition, Rediscovering Lost Values and Stand and Deliver held a “Call to Duty” rally at the corner of Marcy and Myrtle avenues at the Marcy Houses development.

Speaking from the Tuesday night rally, activist Umar Johnson said to the AmNews, “This is all about who we are and first being accountable for and to ourselves, then holding responsible those whom we trust to protect and defend our village. This is not about the haves and the have-nots. Sad to say, soon and very soon I see myself preaching the obituary of Bedford-Stuyvesant as we knew it—once the most progressive Black village on the East Coast. Why the issues that are plaguing this side of Bed-Stuy less important to the Community Board 3 than the Brownstoners south of Gates Avenue? Major construction, home owners being harassed, children being deprived of wholesome safe haven—a place to be when all around them is death and destruction.”

Johnson told the AmNews that such a safe haven has been established in the Marcy Houses, where young people will be able to come in and relax and be safe. He added that there will be more rallies and community conversations to announce details.

Steve Davis, NYPD deputy commissioner of Public Information, told the AmNews that although the shootings were disturbing and tragic, the number wasn’t unusual. In 2012, for example, during the first weekend of summer, there were 33 shootings. Davis said that he is “familiar with how violence is tracked and investigated, and while the shootings this weekend were notable, spikes do occur. The numbers go up and down.”

He explained, “One week there may be 10 shootings, the next week there may be 21. Last Tuesday, the numbers compared to last year were flat. Shootings were even, but now they are up 3.75 percent. Overall crime as of today is down 8.5 percent citywide. So we have 21 shootings and it gets people’s attention, and it should, but I have the luxury of looking at it historically. There were 277 shootings citywide for the year to date. Last year we had 267, and year before we had 290. Historically we have had 400 in one year.”

Davis added, “A significant number of these shootings are ‘gang’ or crew related. Much of this violence is turf related, not even like in the old days when it was about people infringing on businesses. Most violence is senseless, but this is particularly so because people are willing to take lives over stepping on the wrong side of the street.”

Davis said the shootings are all currently under investigation. Although they are suspected to be crew or gang related, police are not ruling out criminal and drug activity. He encourages what he calls “community partnerships” and said, that in challenging the gun violence, “The community is very active, and we know the crews involved, and we have already made inroads. So we have to focus on resources, reaching out to our community partners and sources of information.”

Davis said that along with a summer anti-violence initiative, the NYPD now uses “predictive policing.” “So now if we see that during the weekends there is an uptick in violence,” he noted, “we can deploy more officers in an area.”

However, Davis bemoaned the current lack of community cooperation, even among victims on occasion. “Last year, 30 to 35 percent of victims refused to cooperate,” he said. “There is a question of fear, or defiance, or gang mentality. But it it is something of a phenomenon that I didn’t experience the ’80s.”

The AmNews pointed out that police-community relations are currently dire, and there is a lack of trust and a high level of frustration because rogue cops are not held accountable.

Davis said he understood, and “warranted or not, under Commissioner [Bill] Bratton, we are trying to establish the trust factor.” He added, “But if we are at a point where we can’t get you to help us solve a crime in your neighborhood, that’s really bad. But by and large, we are a lot safer now than we have been.”

In a joint statement Monday, Brooklyn Council Members Jumaane D. Williams, Robert E. Cornegy, deputy leader and co-chair of the Council’s Task Force to Combat Gun Violence, and Mark Treyger said, “The tragic shootings this weekend reminds us that when temperatures rise, too often gun violence follows, but this year, that does not have to be the case. To properly combat gun violence, we must deal with the supply and demand of guns. We must also treat gun violence as the public health crisis it truly is by providing resources these communities desperately need, including jobs and mental and social/health programs. Our city has allocated $15 million to lower gun violence by employing evidence-based community interventions, anti-violence messaging and support services in areas where the Crisis Management System has been implemented. It’s our hope that with this and joint community efforts, we will put an end to tragedies like those we saw this weekend by lowering the gun violence rate once and for all.”

“It’s real!” declared long-time anti–gun violence advocate Andre Mitchell, founder and executive director of Man Up. “It’s gonna continue to be a real Black and Brown issue until we as a city stop penny pinching and put some real resources into these methods we have that they know work. None of the shootings this weekend occurred in any of the ‘Cure Violence’ areas, except one in Brownsville, where the program isn’t up and running. That says a lot about the mold.

“We have to move more towards having the community people on the streets armed with resources, more than the police heavy/friendly cooperative model that threatens people, and holds people and the formerly incarcerated responsible and accountable for things that go on in the community, with no evidence that connects them to a crime, but depending on their criminal background. This Cure Violence program is real, seven-days-a-week work, so what we need is more funding because we want to cover more hotspots and deploy more people to canvass/patrol other target areas.”

With noted success over the years, Mitchell said his anti-violence, community-building organization is tried and tested. He calls on the private sector and foundations to “come through with matching funds, and cut a check yesterday, while promised public funds work through the 10-month process. Help us. We can cure this violence. Let us do the work.”