The Greater NY Links in Philadelphia 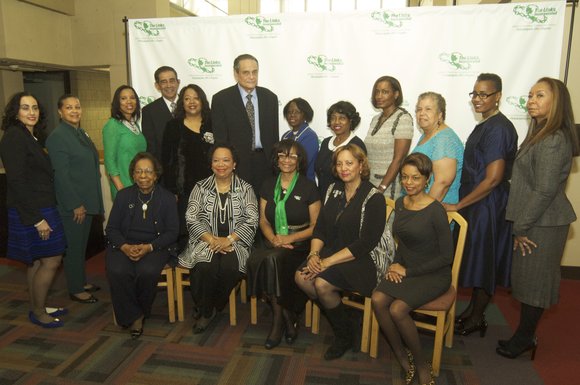 The Greater New York chapter and the Philadelphia chapter of the Links commemorated the social activism of the Links founding members in celebration of Women’s History Month.

In recognition of how the nine founding members of the Links, an African-American women’s social club, were committed from inception in 1946 to actively serving the needs of their local communities and fostering close alliances with other civil rights organizations, such as the NAACP, two Links chapters launched a “Legacy Weekend.” The Philadelphia chapter (the founding chapter) joined with the Greater New York chapter (the first chapter in New York) to reflect on the rich history of social commitment. The inaugural Legacy Luncheon and panel discussion were held at the International House in Philadelphia, Pa.

The program elevated and celebrated the history and social activism of the first chapter organized by co-founders Margaret Roselle Hawkins and Sarah Strickland Scott in Philadelphia. The Links Eastern Area Director Diane Hardison and Area Secretary Shauna Tucker participated in the program as panelist.

Dr. Marcella Maxwell, Greater New York chapter/Eastern Area chair, Women’s Issues, said, “I proposed this concept to the founding chapters in an effort to reflect on the rich history of the Links and share with new members our deep-rooted social commitment to underserved communities.”

“We were thrilled to host this educational weekend of reflection and purpose in celebration of the vision and commitment of our Links co-founders and the chartered chapter members,” said Philadelphia Chapter President Sherilynn Johnson-Kimble. Other Links members, Stephanie Watkins, Alexia Hudson-Ward, Lisa Hawkins, Brenda Johnson and Vivienne Crawford, spearheaded the collaborative platform in Philadelphia.

The program started with a moderated panel discussion to review the rich history of the Philadelphia chapter and celebrate Links leaders (past and present) who have had a positive impact on social action and justice. This discussion was followed by a tour and historian’s presentation of the African Episcopal Church of St. Thomas, including the viewing of the 12 “Stations of the Cross” paintings by Margaret Roselle Hawkins. The day ended with a closing reception of friendship.