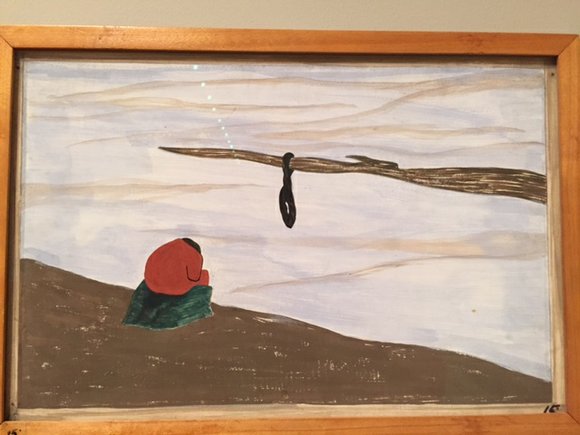 The Lynching by Jacob Lawrence

The artist Jacob Lawrence’s “One-Way Ticket: Migration Series and Other Visions of the Great Movement North” is now on exhibit through Sept. 7 at the Museum of Modern Art.

The MoMA show reunites all 60 panels of Lawrence’s migration series for the first time in 20 years. This exhibition connects the dots of Black culture by including other accounts of the movement. The exhibition also offers a series of public events, new commissions, film screenings and music performances.

Lawrence (1917-2000) completed his series of 60 small tempera paintings with his own captions in 1941 at the age of 23. “Migration” reflects his artistic responsibility as a social activist. During the early 20th century, Black men were more than just social activists by the mere fact of being Black in America. Lawrence was an art warrior. His “Migration” paintings were a colorful epic of African-Americans migrating from the rural South to the urban North. The work depicts a major Black experience, with moving scenes of family intimacy, tenderness and scenes of terror and violence.

The captions added another reality to his bold colorful paintings. For example, “Among the social conditions that existed which was partly the cause of the migration was the injustice done to the Negroes in the courts,” and “Another cause was lynching. It was found that where there had been a lynching, the people who were reluctant to leave left immediately after this.”

Although lynchings are nonexistent today, young Black men like Trayvon Martin (Florida), Eric Gardner (New York City) and Michael Brown (Ferguson, Mo.) continue to get killed, and in court the offenders are not convicted. Now it’s time to stand together. That is what the Great Migration was all about—moving to a better place and making it better.

The Black newspaper, like the African drum, was the primary means of communication in the 1940s. This is the context of Lawrence’s Black man reading a newspaper with the caption, “The Negro press was also influential in urging people to leave the south.”

The exhibition includes video and audio recordings of Billie Holiday singing “Strange Fruit,” classical singer Marion Anderson singing on the steps of the Lincoln Memorial in Washington, D.C., in 1939, Duke Ellington and Paul Robeson. There is a gallery devoted to the writings of Langston Hughes, Richard Wright and Claude McKay. The final selection includes visual and textual sources that reported and gave image to the Migration with photographers Dorothea Lange, Marvin and Morgan Smith and Gordon Parks Jr.; sociological studies by Carter G. Woodson; and political cartoons and paintings by Romare Bearden, Charles Alston and Hale Woodruff.

The Great Migration offered new cultural expressions across the urban areas in the Northeast and Midwest United States. The Migration played a role in Harlem’s reputation as the Black culture capital of the world. Lawrence’s peers and those involved gave Black folks a new voice in America that produced new forms of music, political concepts and images. MoMA is open seven days a week. Visit them online at moma.org.