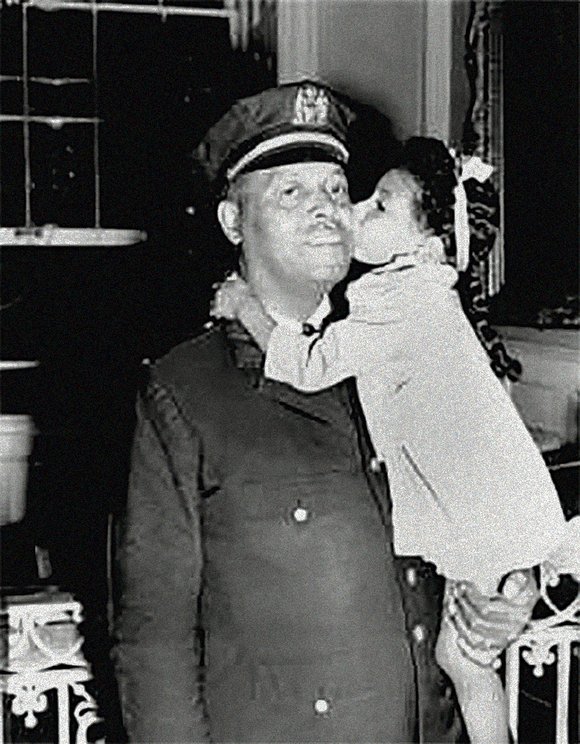 Lt. Samuel Battle and his 4-year-old granddaughter Yvonne at his swearing in as the first Black parole commissioner of New York City, Sept. 4, 1941

In fact, as Otis relates it, Williams gained his inspiration and confidence from Battle overcoming a longstanding barrier. “Williams read all about Battle’s historic breakthrough in the Black papers,” she wrote, “and he heard his teachers sing Battle’s praises, and he knew Battle, a family friend. And at the San Juan Hill YMCA, Williams heard all kinds of tales about ‘Big Sam’ and his exploits on the job … Battle had broken the mold and survived.”

With all the current discussion about white police officers shooting and killing Black men, we take time out to follow the career of a remarkable Black officer who, like Williams in his fight to become a firefighter, had to deal with a welter of challenges to maintain his integrity and garner respect.

As a participant in the Columbia University Oral History Project, Battle was interviewed by Patrolman John Kelley in 1960 and began by stating: “I was appointed, and it’s a matter of record, the first Negro to be appointed [a policeman] in Manhattan, and the first under the Greater New York charter. Prior to that, there had been Negroes on the force in Brooklyn. That was June 28, 1911.”

Battle was 28 on this momentous occasion, and there were times in his troubled life when such an outcome was inconceivable. He was born Jan. 16, 1883, in New Bern, N.C. Though his father was a Methodist minister, Battle, as a teenager, was not without his youthful misdemeanors. He was caught stealing money from a safe where he was employed, but his boss did not press charges against him because he knew Battle’s father.

Battle, perhaps to escape this early misstep and to embark on a new life, moved to Connecticut and then on to New York City in 1901, where he secured a job as a houseboy and red cap at the Sagamore Hotel. He was doing reasonably well and raising his family, but there was always the desire to do better. Influenced by his brother-in-law, Moses Cobb, who was a police officer in Brooklyn, before its merger with New York City, Battle decided to compete for an appointment.

Out of 638 applicants and testers, Battle ranked 119th and that qualified him to become a police officer, but not yet with a uniform. That would take another month or so during a probationary period. Upon getting his uniform, he was assigned to the San Juan Hill section of the city, then a predominantly Black neighborhood and today the location of Lincoln Center.

It was a memorable phase in Battle’s career and the community, as particularly in that section the city was in transition. “The West 68th St. Precinct took in 59th to 86th streets, Central Park West to the River,” he said in the interview, describing the district. “That was the San Juan Hill area. Just west of Amsterdam Avenue was mostly Negro; east of Amsterdam Avenue was generally Irish. South of 65th Street, it was a mixture, but generally Irish. The Negroes lived, as I say, on the west side and down the hill from Amsterdam Avenue.

“There is still a hill there now. When you get up on level ground, on the east side of Amsterdam Avenue, it’s level ground. So San Juan Hill was named that in connection with a battle in the Spanish American War, so that when these Negroes came onto the west side, they dubbed it San Juan Hill because they used to come up the hill after the whites. They had riots. Many riots.”

During one of these riots around 1911, Battle said he was working on reserve one night when he rushed to a melee. “We had wagons to carry us, to transport us to places when on reserve, but this was so nearby, I didn’t wait,” he recalled. “I dressed quickly and was running down Amsterdam Avenue. I was in training and a good runner, and going fast. When I passed the firehouse, I heard a fireman say, ‘There goes Battle, he’s in the lead!’”

Taking the lead was nothing new for the fearless Battle, and hardly an incident occurred in the precinct where he was stationed that didn’t find him at the forefront of the confrontation, mainly to resolve a dispute or altercation. As the Black population shifted from San Juan Hill to Harlem, so did Battle’s assignments. By 1926, with the fabled Harlem Renaissance in full bloom, Battle became the first Black sergeant. Nine years later, he became the first Black lieutenant.

The rise through the ranks was not without the racism, silent treatment and the general slights often endured by a Black man in an all-white fraternal order. There was also resentment from white visitors to Harlem unaccustomed to seeing a Black man in uniform. But these acts of disdain from tourists were minor compared with what he received from his fellow officers. A note full of racially charged and threatening language—akin to the nooses that future officers would get—was left on his bunk. It included a hole in it the size of a bullet.

But his color would prove an asset in Harlem when mayhem struck the community, as it did in 1943. To help quell the racial disturbance, Battle, by this time the city’s first Black parole commissioner, was summoned by Mayor Fiorello La Guardia, and his presence provided the calming effect needed.

Battle’s glorious and action-packed career ended with his retirement in 1951. He was 58. At that time, he was the highest-ranking African-American on the force. Battle was 83 when he died Aug. 7, 1966.

Thanks to the tireless work of Jacob Morris and other community activists, the corner of 135th Street and Lenox Avenue (Malcolm X Boulevard) was renamed “Samuel J. Battle Plaza” in 2009 to honor his achievements. This was a propitious location because it was where Battle saved a white officer’s life during a racial disturbance in 1919, possibly one of the incidents during the volatile Red Summer, just when Wesley Williams was pulling on his fireman’s uniform for the first time.