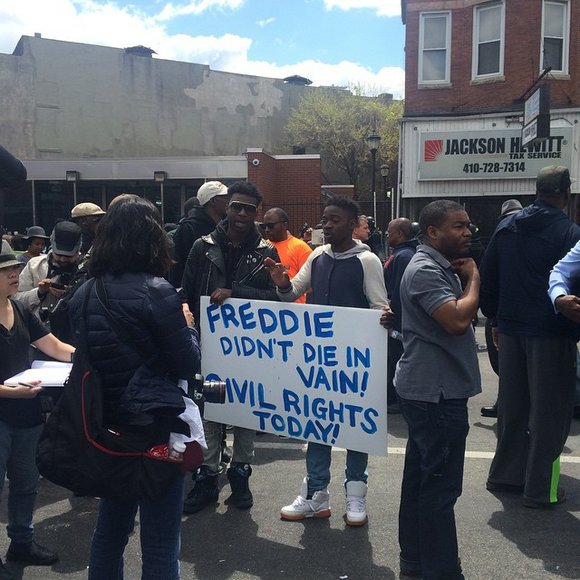 Images of fires, police, rioting and looting were seen around the world during an intense night in the city of Baltimore on Monday. While the rioters are being criticized for their actions, those on the ground say the actions are a result of tensions boiling over and a long history of police brutality.

Social media also played a role in keeping the world abreast on what's going on. Photos and videos accompanied with hashtags #BaltimoreRiots, #BaltimoreUprising and #FreddieGray were top trending.

"It's extremely heartbreaking for someone born and raised in Baltimore," Mayor Stephanie Rawlings-Blake. We know how hard people work to be able to have a city we know and love and watch a group of criminals go through our city with an intent to destroy."

Rawlings-Blake has implemented a citywide curfew from 10 p.m. to 5 a.m. in Baltimore for the rest of the week.

Riots broke out on the streets of Baltimore Monday night in response to Gray's death at the hands of police.

Gray was killed while in police custody last week after being detained on April 12. He suffered a spinal cord injury while being transported and officers did not give him medical attention leading to his death.

An investigation into Gray's death is ongoing as the officers involved remain on suspension and have not been charged.

Speaking on Tuesday, President Barack Obama condemned the rioting in Baltimore but recognized the need for change in the nation when it comes to police and it's treatment of Black citizens.

"Since Ferguson, and the task force that we put together, we have seen too many instances of what appears to be police officers interacting with individuals -- primarily African American, often poor -- in ways that have raised troubling questions," Obama said. "And it comes up, it seems like, once a week now, or once every couple of weeks. And so I think it’s pretty understandable why the leaders of civil rights organizations but, more importantly, moms and dads across the country, might start saying this is a crisis."

Baltimore leaders from the NAACP held a press conference Tuesday morning condemning the violence and demanding justice for Gray.

"The city of Baltimore now burns in the flames of violence that may leave more dead. The loss of more lives will neither comfort Mr. Gray’s family nor explain the incidents that led to his death. We must continue to manifest our moral outrage into peaceful protests that seek to garner meaningful change," said NAACP President and CEO Cornell William Brooks

Demonstrations after the funeral became violent with the Baltimore Police Department reporting that people were throwing objects. Officers had several injuries including broken bones and one becoming unconscious because of his injuries.

Looting was also being reported at a drugstore, shopping mall and check cashing store along with vehicles being set on fire.

“It’s mostly high school kids,” said local resident Dajuan Moffett who was on the scene. “They are throwing rocks at police officers, setting abandoned houses on fire, cars on fire. It's like war.”

Local leaders say rioting of this magnitude has not been seen in Baltimore since 1968 when Dr. Martin Luther King Jr was assassinated. Those in the area say Black residents in the city have been plagued for decades with disenfranchisement and poverty.

Police-community relations are also a factor. Numerous incidents of police brutality against Blacks have led to settlements costing the city millions of dollars.

The Rev. Al Sharpton is in Maryland to get answers about Gray’s death and met with the mayor of Baltimore, the city's National Action Network chapter and local clergy. He recently announced a two-day march from Baltimore to Washington in May.