A Tale of Two African Nations: Nigeria and Congo 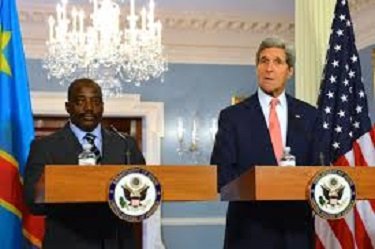 Nations across sub-Saharan Africa have for decades struggled to establish strong and stable democracies upon the ruins of single-party systems notorious for squelching dissenting views, jailing opposition leaders and embarking on self-serving economic policies that brought hardship to their peoples.

It has been a long, complicated and often painful journey. But these struggles have not been in vain, as is amply demonstrated by the success of the recent presidential election in Nigeria, Africa’s most populous country.

In a significant turn of events, President Goodluck Johnathan was defeated by Mohammadu Buhari, an opposition leader, marking first time a Nigerian president was swept from power in an election since that nation’s independence from colonial rule.

“Nigerian democracy will be a beacon across the continent and beyond,” Linda Thomas-Greenfield, the U.S. Assistant Secretary of State for African Affairs, said in a statement that echoed the sentiment of pro-democratic leaders in and out of Africa.

Nigeria is hardly the only sub-Saharan nation where there are tangible signs that the quest for democracy has begun to take root. Burkina Faso, Cote d’Ivoire, Guinea and Togo are among countries scheduled to have presidential elections this year, according to the Electoral Institute for Sustainable Democracy in Africa.

But disturbing news has recently come from other parts of Africa, including Democratic Republic of Congo, where President Joseph Kabila has left open the possibility that he may amend the Constitution in order to run for president in 2016 when his term ends.

In March, for example, the DRC’s security forces arrested a United States diplomat who, according to a DRC government spokesman, was found with a group that was believed to be planning “an attack against state security”.

But Deutsche Welle, the international broadcaster of Germany, quoted Phil Clark, an expert at the University of London, disputing the DRC government’s assertion that the activists presented a threat to the country.

"What we are seeing here is the concern of the Congolese government that this group could ultimately put thousands of young people to the streets to contest President Kabila's attempt to extend his presidential term," Mr. Clark told Deutsche Welle.

More disturbing was the discovery of 421 bodies that were reportedly buried at night in March in rural Maluku. Human Rights Watch has suggested that the bodies were those of individuals who died in two, bloody episodes that gripped the nation.

The first involved an anti-gang campaign that HRW says left 51 dead from late 2013 to early 2014. The second event grew out of anti-government protests that erupted earlier this year over a proposed law that would have delayed the 2016 presidential election and thus allowed President Kabila to remain in office.

Opposition lawmaker, Martin Fayulu, has called for an investigation. "Why bury these people at night?” he told Reuters. “There needs to be an inquiry. This is not a simple affair."

Fittingly, the U.S. has been closely watching the events unfolding in the DRC. Secretary of State John Kerry has met with President Kabila and encouraged him not to amend his country’s constitution in order to run for a third term. President Obama has since weighed in with Kabila as well. But Kabila has yet to give hard and fast public assurances that he will not chart a course to remain in power.

Few observers of U.S. policy in Africa are naïve enough to think that U.S. interests in the DRC are being driven solely by the quest to bring democracy to the Congolese people. The stated U.S. moral imperative of fostering self-determination in other countries is often directly linked to the rich resources these countries have. In the case of the DRC, it is abundantly rich in minerals that contribute to powering the world’s economy.

But setting aside the interest the U.S. has in these resources, it is important to note that ensuring an orderly transition of power in the Congo is vital to ensuring that the DRC -- and possibly the region – do not plunge into chaos as a result of the Kabila regime’s efforts to suppress legitimate dissent and the free-expression of political views.

With Nigeria’s democratic fate now safely determined, at least for the short-term, how the United States engages with other countries to bring pressure on Kabila will be one of the most crucial U.S. diplomatic initiatives affecting the future of Central and Southern Africa.