Another beginning for Dance Theatre of Harlem 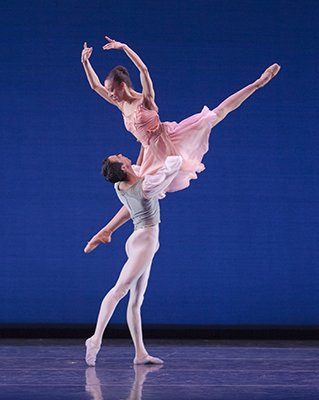 In 2013, under founding company member and former principal ballerina Virginia Johnson, Dance Theatre of Harlem made a grand return after an eight-year hiatus. Johnson was named artistic director by founder and former Artistic Director Arthur Mitchell.

The April 2015 season marked another return, this time to their longtime home, New York City Center. The energy, as a result of this long-anticipated return, was palpable on opening night, and the charge, we would learn, was to foster DTH’s continued growth.

There was an overall cry for support for the dancers, alumni were acknowledged, and DTH’s “godfather,” the late Geoffrey Holder, was honored. The elegant Johnson opened the evening, stating, “What a joy it is to be here … we are home again.”

Fittingly, students of DTH followed with Holder’s signature “Dougla” (1974), then Robert Garland, resident choreographer and former principal, introduced Holder’s wife, Carmen de Lavallade, to rousing applause. When the house quieted, she said, “I was about to say I wish Geoffrey was here to see this, but he is in the house.” From the stage to the lobby, this evening was a coming together of sorts.

Dancer turned choreographer Nacho Duato was perfect for this return because of his intense imagery and the dancer-driven execution seen in his works. For the evening’s program (“What’s New”), Duato’s fast-paced fusion of raw movement, mixing modern and ballet in “Coming Together,” was the highlight. Here, every dancer shines.

The stage is big, Duato’s vision is big (especially the blinged out, gold curtains that fall from nowhere to cover the back wall from top to bottom), and the dancers dance big and fast in pointe shoes, jazz shoes and bare feet. Duato and the dancers answer to Johnson’s claim of diversity at DTH. Sadly diminutive on this big stage, though Ashley Murphy shined, was George Balanchine’s “Tschaikovsky Pas De Deux.” Here’s to hoping for more classics and more command of the classics for this ever-growing ballet company.

Also on the program was Ulysses Dove’s “Dancing on the Front Porch of Heaven,” a decidedly difficult ballet jam-packed with Dove’s signature juxtaposing of modern dance styles en pointe. As in other works, Chyrstyn Fentroy danced beautifully, and so too did Fredrick Davis and Anthony Savoy in the challenging and constantly weight-shifting duet of balances and bravura. More proof of how well they capture contemporary works, especially the partnering towards the end, is Darrell Grand Moultrie’s “Vessels.” Before she left the stage, and with arms held high shaking at the elbows, de Lavallade demanded that everyone “support the dancers … it’s their turn to grow … we love and need them.”