Best looks for brides and grooms 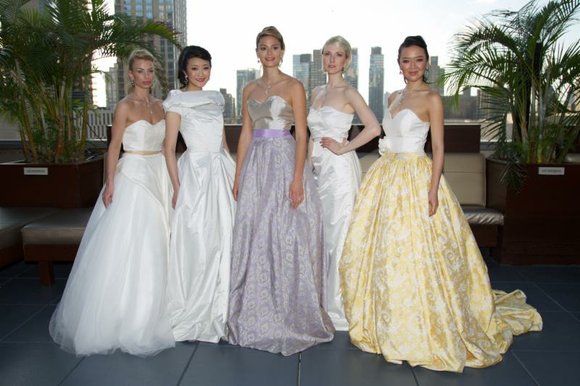 For brides, he used silk organza, silk chiffon and silk brocades in ultra voluminous shapes. Breton shows traditional silhouettes as well as unusual bridal wedding dresses. There were also several wedding dress styles in his collection, shown recently at the last Mercedes-Benz show, held at Lincoln Center. His spring-summer 2015 theme was “A Journey to Taiwan.” The details in the creation of bridal wear are ongoing. There’s the draping, unusual fabrics, tulle trains, lace, long zippers in back, strapless styles, halter hits, fishtail treatments and figure-fitting fashions. This collection is luxurious and the designs are embellished with regal accents.

Thursday, April 30 at the DGA Theatre, 110 W. 57th St., will see the premiere of the documentary about Breton’s “A Journey to Taiwan.” It promises to be a red-carpet celebrity event. Following the screening of the film, there will be a Q and A panel discussion. The film exposes some of his most uniquely inspirational visits to his homeland. In the film, he shares his thoughts, recollections, special sights and colors. For Breton, the combination of Taiwan’s sensual and mysterious places, people and things have all come together full circle.

The designer and creative director of Malan Breton, Malan Breton Fantome, Malan Breton HOMME,and Malan Breton Bridal Collections, Breton was born in Taipei, Taiwan. He currently resides in New York City. A designer since the age of 11, he is self-taught and has never attended a design school. Breton, well-known for his signature detailing and fabrics, just received the 2014 European Fashion Council “Eirene” Fashion Award.

Breton also has a syndicated celebrity fashion column in OK! magazine titled “Malan's Musings.” His fashion coverage of the British royal wedding received 10.8 million unique views and coverage in over 100 publications. Breton was the subject of “The Malan Show,” a six-part series on Bravo TV, which followed the process of making it in America as an independent designer.