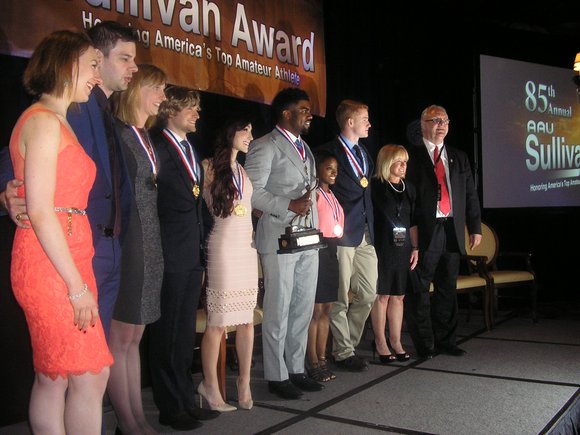 Amateur Athletic Union President and CEO Dr. Roger J. Goudy described this year’s Sullivan Award finalists as perhaps the strongest group ever, an unquestionable who’s who of amateur sports. April 19, the Sullivan, awarded to the nation’s top amateur athlete, returned to the New York Athletic Club after a two-year absence. AAU founder James E. Sullivan was a member of the NYAC. Also, the NYAC is a building rich in history, with 248 Olympic medals, 131 of them gold, won by athletes affiliated with the club.

A gathering of Sullivan Award winners

“The event is the flagship of what we do because it represents the best athlete,” said Goudy of this 85th annual Sullivan Award. “That’s what we do, amateur sports.” The AAU runs 680 national championships in sports such as basketball, track, volleyball and swimming.

“There’s an amazing group of athletes here,” said Biles, two-time U.S. and World All-Round Champion (2013 and 2014). “To be recognized for all these character traits is an amazing feeling. To know that on the mat or off the mat they recognize our abilities is such an honor.”

Biles knows that girls and women of color find her success in gymnastics inspirational, and she’s grateful to be that person to motivate others to try the sport that she loves. Someone who loves being innovative, she’s even created her own move.

“It’s an honor to be here with some of the best athletes in the world around,” said Elliott, also an accomplished track athlete who won AAU nationals during high school. “The Sullivan Award is special. I think it’s very interesting. It’s exciting to be here.”

In the event’s dramatic conclusion, Elliott was named the winner. He thanked his parents—his father a former college football player and his mother a track athlete—for their love and encouragement.