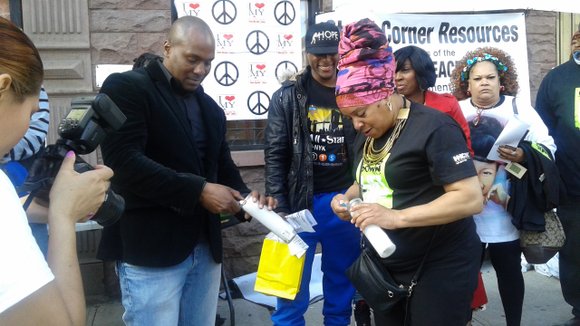 Sunday, April 26, people gathered on the corner of 120th Street and Adam Clayton Powell Boulevard in Harlem to commemorate the sixth anniversary of the stray-bullet slaying of 13-year-old Chris Shakim Owens in 2009.

“I miss my little man every day,” said Chris Foye, Owens’ father and founder of the Chris S. Owens Foundation. “I wish I had more time with him.”

Grown men and women struggled to hold back tears as parent after parent told their story of loss, as the crowd on the corner—families, anti–gun violence activists, passersby and the curious—hugged the corner for a good purpose.

The In 2 Deep bikers rode in from Staten Island, Long Island and New Jersey, and provided an honor guard as speakers addressed the growing crowd—speakers such as Oresa Napper of notanotherchild.org, representing her son Andrell D. Napper, murdered in 2006; Jackie Rowe-Adams of Harlem Mothers SAVE; James Dobbins of Guns Down, Life Up; Calvin “The Brooklyn Don” Klein; Iesha Sekou from Street Corner Resources; and Dawn Jones from the National Action Network and Convent Baptist church.

The crowd audibly gasped when Shagla Hightower detailed how her daughter Iofemi was one of three Delaware State University students killed by the notorious MS-13 gang in 2007. She was one of the four lined up in a Newark school yard. One survived, but Iofemi was sexual assaulted, hacked with a machete and shot to death by six members of the notorious gang.

“So yes I am out here for my daughter,” Hightower said to the audience. “She was killed by MS-13. So I am out here for these children, so they don’t get swept up by these gangs, so they can say, ‘No, I’m better than this.’ I started a nonprofit in her memory, because where I am from in Jersey, people look at it like it is normal. But there is nothing normal about a mother or father burying their children to gun violence. So I wanted to bring awareness that this is not alright. We need it to stop. We need to go to our legislators to get stricter gun laws.”

Family spokeswoman and Washington TV correspondent Charmil Davis is producing a documentary on the horrific slayings.

Foye thanked the grieving parents for attending the vigil. He also heaped praise on funeral director Tyrell Carrillo, who donated $1,700 so that his son could finally get a tombstone.

“Father to father, I had to do it,” Carrillo told the Amsterdam News. “I wanted to help, so as a father I donated the money to get a headstone.”

To the audience, he spoke of the pain of losing his own baby brother to gun violence, and also of having to prepare the bodies of young people who had been shot.

“Seeing a child on the embalming table with bullet holes in his back, in his head, bothers me. And what bothers me more is that he is killed, he’s given a funeral, a report in a police blog ... but then there’s no more attention, no marches for these kids killed on the corner. We just forget about them.” So he is happy to join with Foye and continue the fight to quell the madness.

Knocking what he called “the criminal code” of refusing to speak even to aid in catching a killer, in relation to his son’s murder, Foye stated, “There was over 300 people out here, and nobody said nothing. There’s a difference between snitching and saving a life. There’s nothing gangster about shooting into the crowd. We are looking to save lives.”

Abubaka Miller from the Committee to Honor Black Heroes and Assemblyman Jeffery Davis, whose brother James was shot to death at City Hall in 2003, joined a dozen organizations who came to show their support and demand resolution to inner-city violence.

“We bang intellectually now,” said Foye. “We are creating a whole new era. I took the opportunity to not avenge my son’s death with more violence … we are operating from a place of education and love.”

Nodding to the group of young men who were filming for the documentary and recording interviews, Foye pointed out that he is now teaching young people how to become entrepreneurs.