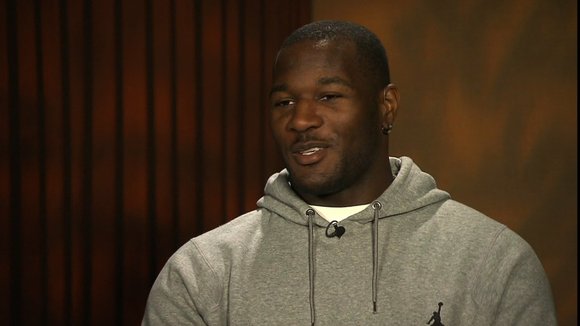 Derrick Coleman is a fullback for the Seattle Seahawks -- the best team in the NFL, according to current rankings. He scored his first touchdown in the NFL on December 2, 2013. He's also the first legally deaf offensive player in the NFL. CNN

Editor's note: Vital Signs is a monthly program bringing viewers health stories from around the world.

(CNN) -- When you meet Derrick Coleman, Jr., the first word that comes to mind is "genuine." The list does not stop there. Throw in "appreciative," "funny," "kind," and "impressive." And all of that is before you even realize Coleman is a rising star in the National Football League, who also happens to be deaf.

"On a scale of 0-10, normal people range from about a seven, eight, or nine," Coleman said. "Without my hearing aids, I'm about a one or two."

On the football field, you'd never know. Coleman likes it that way. One of his favorite memories is being on a boat with his friends on a lake. They pushed him in the lake, even though Coleman had his hearing aids in. But he wasn't upset -- in fact, it was just the opposite. In that moment, his friends had forgotten he was wearing hearing aids. They had forgotten he was deaf.

Coleman has other less pleasant childhood memories. He doesn't remember ever having his hearing; he lost it when he was three because of genetic reasons. His parents both have normal hearing -- but they are each missing a hearing gene. He does remember getting bulky hearing aids in elementary school, and he remembers the kids calling him "Four Ears."

He also remembers what it was like to play football for the first time in middle school -- when he finally found the place he belonged.

"Football, basically, it gave me a sense of understanding of where I stand in this world," Coleman said. "And it made me understand the world a lot better. In between those white lines, that's all that matters."

Coleman let his performance on the field do the talking. Everyone started listening. By the time he was a freshman in high school, he was on the Varsity team.

"If you have a disability, and you're letting that disability affect your performance, you make excuses," Coleman said. "Football was the first thing [where] I didn't want to make excuses for this. I just want to play."

But football for Coleman almost never happened. His parents were worried the tough hits could do further damage to both his ears and his hearing aids.

"I played football, I know what a violent sport it was," said Derrick's father, Derrick Coleman, Sr. "I know what the helmet-to-helmet collisions feel like, the headaches, and the injuries. So now as a parent, the concerns of a child with a hearing disability, and wearing hearing aids -- how would that work?"

Coleman begged his parents to let him play. An MRI showed the structure in his ears could withstand the hits, and he wore a cap under his helmet to keep his hearing aids in place. But there was one more critical obstacle he needed to figure out.

Football relies heavily on verbal communication. Coleman plays fullback and running back and to make sure he never missed a play call, he perfected lip-reading, even behind mouth guards and facemasks.