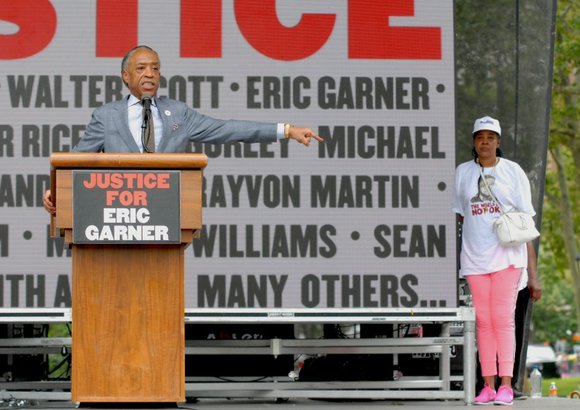 While his last breath was recorded for the public to see, the records from the grand jury that let his murderer go will remain sealed.

Last week, the Appellate Division Second Department ruled in favor of keeping secret the records from the grand jury that failed to indict officer Daniel Pantaleo in the death of Eric Garner.

“The New York Civil Liberties Union is going to appeal this decision,” said Arthur Eisenberg, legal director of the New York Civil Liberties Union, in a statement. “We argued that disclosure of the grand jury records is necessary to inform the community and its representatives in the Legislature and allow for an informed debate regarding the issue of grand jury reform in cases involving lethal behavior by police officers.”

“The need for transparency to ensure fairness remains paramount,” added NYCLU Executive Director Donna Lieberman in a statement. “The appointment of a special prosecutor is an important step, but it is neither permanent nor sufficient. When a grand jury makes a decision about whether or not to indict an officer in the killing of a New Yorker, the public has a right to know why.”

Back in December, the NYCLU petitioned a Staten Island court to release the grand jury transcript to the public along with the presented evidence and instructions given to the jurors. The following March, Judge William E. Garnett rejected the NYCLU’s request in addition to requests from the Legal Aid Society, the public advocate’s office and the NAACP.

In June, the New York Supreme Court Appellate Division in Brooklyn was ground zero for prosecutors looking to uncover the Garner grand jury testimony. Prosecutors, including legal representatives of the NAACP, the NYCLU, the Legal Aid Society and James’ office, stood before four court justices and requested that the decision to not release grand jury details be reversed. Legal representation for the district attorney’s office argued that releasing grand jury records would lead to witnesses answering questions differently in the future for worry of their lack of anonymity.

“The governor and the Legislature have been considering how to address the problem of alleged misbehavior by police officers and the apparent conflict that arises when a district attorney is called upon to prosecute the police,” said Eisenberg in a statement. “In order to address such issues, it is important to know how and why the grand jury reached the decision that it did. The Eric Garner case presented a special circumstance for grand jury disclosure to advance the need of an informed electorate. The court’s opinion didn’t even consider that crucial question.”