Michael Tucker says no to ‘suns out, guns out’ 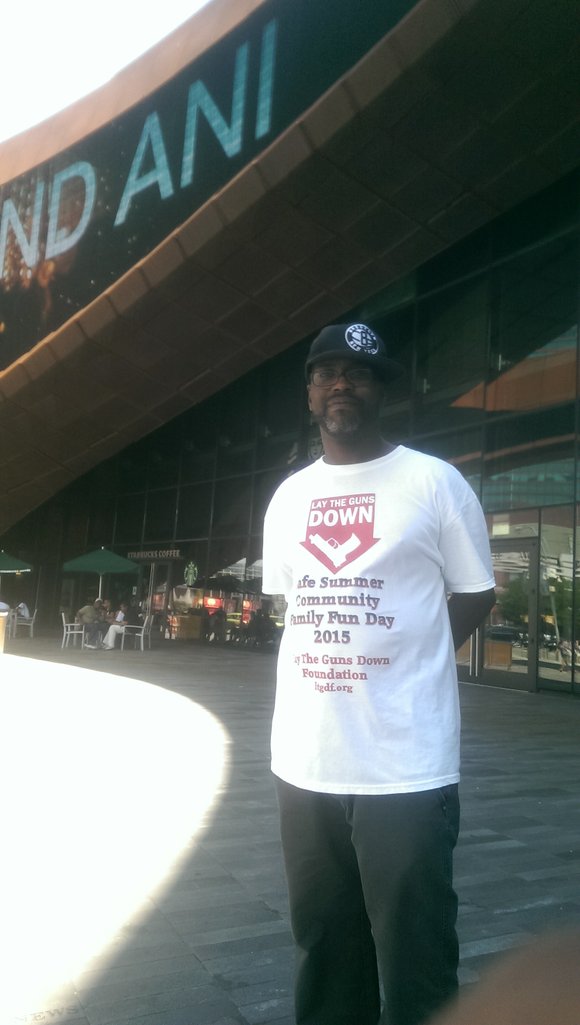 The summer’s sun comes with a slight sense of dread. That old adage is often repeated, “Sun’s out, guns out.” This is the season where the murder rate rises.

Last weekend seemed to confirm that belief. Saturday night, an East New York party ended with gunfire and nine people wounded. That same night, 20-year-old Christian Garcia was shot and killed in a Bronx children’s playground. Community leaders gathered in a Monday press conference across from Brooklyn’s municipal court to say enough is enough. They believed they’d come far enough to not be reminded of the 1990s, when the number of yearly murders reached the thousands.

Mike Tucker, the founder of Lay the Guns Down Foundation, was one of the leaders who spoke during that hot early afternoon. Tucker, a 49-year-old Bed-Stuy resident, refuses to subscribe to the popular belief of summer violence.

Founded in 2008, Lay the Guns Down came about as a result of Tucker’s personal tragedy. His son Stephonne Crawford Sr. was 21 years old when police shot him in the back of the head in what was declared an “accidental shooting” in 2005. Police claimed that they believed Crawford had shot two men during a dispute beforehand, but he was only found with a sharp razor when he died.

Tucker got inspired to start “Lay the Guns Down” when one of his uncles, a frequent churchgoer, talked to him about a conversation he had with his pastor about the need to stop gun violence. “I’m like, ‘Hey, you gave me a great idea,’” said Tucker.

Lay the Guns Down is a grassroots organization dedicated to teaching communities about the dangers of gun violence and offering alternatives through various programs. One of them takes kids who lost family members to gun violence to meet players from the New York Giants.

Tucker is a speaker as well. His passion heightens his volume, but it’s never quite enough to hide the slight wobble that reveals an inner sorrow. He’s not an angry father—a stereotype that invalidates shared African-American pain—but an emotional one.

“People fear us for whatever reason,” Tucker says. “When we speak with the tone that we speak, people look at us like we’re angry. We’re not angry, we’re just voicing our opinions loudly.”

“We wanted the kids to have a safe summer,” said Tucker.