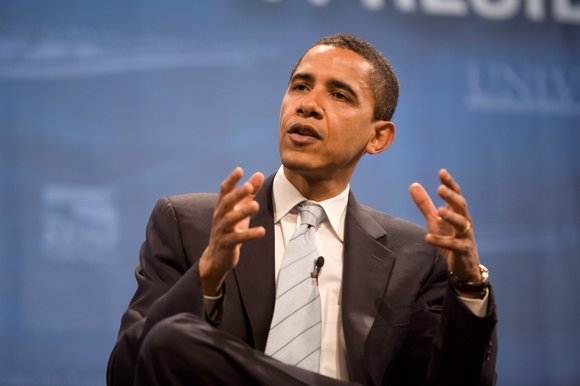 When President Barack Obama announced his Clean Power Plan, there were several long outbursts of applause in the White House Monday, none more sustained than when he remarked that the “plan [was] two years in the making, and the single most important step America has ever taken in the fight against global climate change.”

He couldn’t have asked for a better day for the announcement and to make his point, with the temperature reaching record highs across the nation. According to reports, the press conference was originally planned for outdoors in the Rose Garden, but it was too hot.

As always in a major address by the president, his recitation of numbers is what most of the audience is left with, that is, those sympathetic to his plea for change.

“Levels of carbon dioxide,” he said toward the beginning of his half-hour speech, “which heats up our atmosphere, are higher than they’ve been in 800,000 years; 2014 was the planet’s warmest year on record. And we’ve been setting a lot of records in terms of warmest years over the last decade. One year doesn’t make a trend, but 14 of the 15 warmest years on record have fallen within the first 15 years of this century.”

This fact was mentioned after he reminded his listeners that “not everyone in here is a scientist,” which was clearly a comment aimed at the climate change naysayers, particularly a coterie of Republicans. His plan, as with many of the administration’s priorities, bore a sense of urgency. On proposing his climate change plan in the waning months of his tenure, he said, “I believe there is such a thing as being too late” on acting forcefully on climate.

Then came a flood of more numbers: “With this Clean Power Plan, by 2030, carbon pollution from our power plants will be 32 percent lower than it was a decade ago. And the nerdier way to say that is that we’ll be keeping 870 million tons of carbon dioxide pollution out of our atmosphere. The simpler, layman’s way of saying that is it’s like cutting every ounce of emission due to electricity from 108 million American homes. Or it’s the equivalent of taking 166 million cars off the road.”

“By 2030,” he continued, “we will reduce premature deaths from power plant emissions by nearly 90 percent—and thanks to this plan, there will be 90,000 fewer asthma attacks among our children each year.”

It was not his intention to endorse states’ rights when he said that each state will have the chance to put together its own plan for reducing emissions “because every state has a different energy mix. Some generate more of their power from renewables; some from natural gas, or nuclear, or coal.”

Any mention of coal is sure to strike a nerve in such states as Wyoming and West Virginia, where already a backlash has occurred and the lawsuits to challenge Obama’s plan are being readied.

“Once the EPA finalizes this regulation, West Virginia will go to court, and we will challenge it,” Patrick Morrisey, the attorney general of West Virginia, said in an interview with a radio station in the state Friday. “We think this regulation is terrible for the consumers of the state of West Virginia. It’s going to lead to reduced jobs, higher electricity rates and really will put stress on the reliability of the power grid. The worst part of this proposal is that it’s flatly illegal under the Clean Air Act and the Constitution, and we intend to challenge it vigorously.”

Some deem this a legacy move on Obama’s part, but he feels it’s a necessary action to save the planet. “We’re the first generation to feel the impact of climate change; we’re the last generation that can do something about it,” Obama explained. “We only get one home. We only get one planet. There’s no plan B.

“I don’t want my grandkids not to be able to swim in Hawaii,” he stressed at the end of his remarks, “or not to be able to climb a mountain and see a glacier because we didn’t do something about it. I don’t want millions of people’s lives disrupted and this world more dangerous because we didn’t do something about it. That would be shameful of us. This is our moment to get this right and leave something better for our kids. Let’s make most of that opportunity.”

This plan should also be an opportunity and a wake up call for the rest of the world as member nations prepare for the upcoming climate change meeting in Paris. To a certain extent, China is on board with Obama’s plan, but the proof of it all will be in the air we breathe.