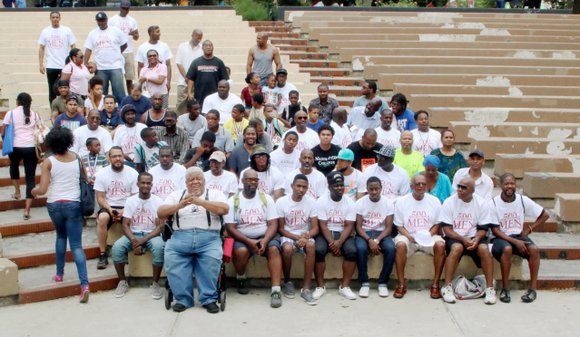 Saturday, July 8, the 500 Men Making a Difference organization hosted its sixth annual Men’s Day celebration. The event, which took place in Von King Park in Brooklyn, featured activities for all ages, including morning exercises, breakfast, a 5K walk/run, basketball, a water fight, a chess tournament, a concert and an all-day barbecue.

Founded by Wayne Devonish, 500 Men Making a Difference pulls together like-minded men from throughout the five boroughs of New York City.

“We’ll do things like mentoring youth and making the community stronger,” Devonish said.

The annual Men’s Day is an opportunity to celebrate as well as to showcase the organization for men who might like to join.

“It was our sixth annual men’s day,” Devonish said. “We had several activities going on throughout the day. This year we added a 5K race and a 3-on-3 basketball tournament. We were pleasantly surprised that we had about 50 people [express interest]. We didn’t expect that many to be interested.”

After the success of the Men’s Day celebration, Devonish is prepping for the organization’s trip to Ghana. Last year, members went to Haiti and performed service work that was described as “remarkable.”