Liberty in the pink 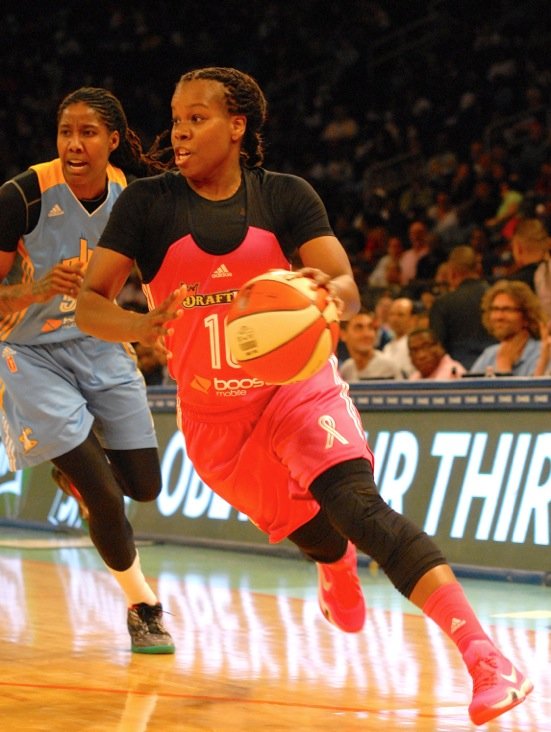 Epiphany Prince and Chicago's Jessica Breland are locked into their own one-onone battle.

Breast Health Awareness Night always brings an emotional vibe to Madison Square Garden, and the New York Liberty rewarded the enthusiastic crowd of 9,987 with a decisive 84-63 victory over the Chicago Sky. Clad in pink uniforms, the Liberty put on a show of team effort for the audience, which included WNBA President Laurel Richie, actor Jimmy Smits and rapper Fat Joe.

There was little sentimentality for former Liberty star Cappie Pondexter, who received only tepid applause when introduced. The Sky were without Elena Delle Donne, and although Pondexter scored 23 points, the team could not match the Liberty offensively or defensively.

Despite leading by nine at the half, the team was chastised by coach Bill Laimbeer for a lack of intensity and defensive effort. They came out smoking in the second half, including guard Candice Wiggins, who rebounded like a demon and scored a huge 3-pointer.

“We’re a solid defensive ball club,” said Laimbeer. “That’s how we play and that’s how we win basketball games—it’s the intensity on defense. We didn’t have it in the first half, but we had it in the second.”

With the win, the Liberty go to 15-6 and sit clearly atop the Eastern Conference. The only team in the league with a better record is the Minnesota Lynx. Although Laimbeer is enthusiastic about the vibe and chemistry of the ball club, he refuses to make big predictions. He is pleased that Epiphanny Price, who had 22 points in the win, is finally taking more shots. Laimbeer also praised the leadership of veterans Swin Cash and Tanisha Wright.

“They all stay ready,” said Laimbeer. “We’re the type of people with the type of camaraderie and chemistry on this ball club that nobody really cares [about playing time]. ... Everybody’s realizing the opportunities in front of us. It’s a matter of we all know we have a long way to go and we can’t be soft on anything.

“I know the depth is what helps us. We’re able to put different combinations out there depending on matchups. The defense is a constant. There is nobody on this roster that doesn’t play defense.”

The Liberty play the Connecticut Sun in Connecticut Friday night then return to Madison Square Garden Saturday to play the Tulsa Shock.