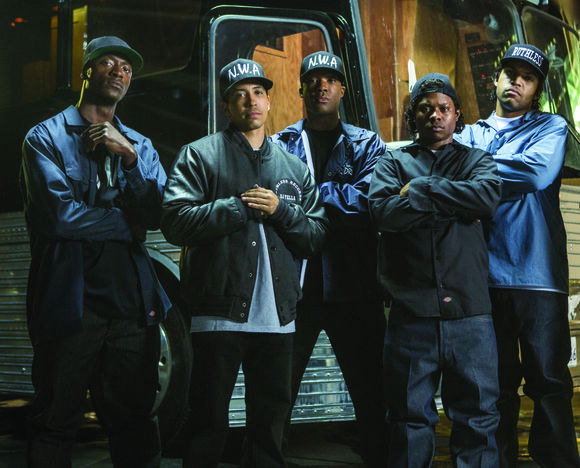 In 1988, the raw and ferocious rhymes of a new hip-hop sound by the group N.W.A. made their song “F–k tha Police” an anthem that resonated with communities around the world. There the legend was born.

This is how artists and writers transform the world—with the power of their words, the force of their will and the drive to tell the truth.

The conventional music-world biopic in an outline but intensely human and personal in its shaping of the story and the fine attention to detail is what director/producer F. Gary Gray delivered.

To the directors’ credit, this film works for those deeply knowledgable about he hip-hop world and the novices alike. The movie works because it’s about human nature, and therefore human fragility and the spirits’ desire to forgive.

These young West Coast men didn’t make the music to become legends. They didn’t spit the lyrics to become icons. Their meteoric rise was fraught with peril. They fought the system, each other and themselves, and along the way they discovered the music and the heavy price of being involved in the often dirty game of the music industry.

N.W.A.’s first studio album (from which the movie takes its title) flipped the hip-hop world on its ear, giving space for the West Coast sound and putting Compton on the worlds’ map. It was a sub-genre the media tagged “gangsta rap,” despite the fact that the N.W.A.’s members themselves preferred the term “reality rap.”

In fact, at the tender age of 19, lyricist O’Shea “Ice Cube” Jackson (played in the film by his real-life son, O’Shea Jr.) said he and his bandmates were actually “street reporters,” giving the details from the front lines, uncensored.

The performances in the film under Gray’s skillful hand makes the film running time, two-and-a-half hours, a non-issue. Frame to frame, it’s riveting material, especially the exploration of the DNA that made up N.W.A., the bonds of friendship between Cube and DJ Andre “Dr. Dre” Young (Corey Hawkins). Their eventual connection with the neighborhood drug dealer, Eric “Eazy-E” Wright (Jason Mitchell) pushes the film into a higher art form.

Never does it feel like a moving cliche, and that’s because of the exhaustively researched screenplay, which is credited to Jonathan Herman and Andrea Berloff (from a story by S. Leigh Savidge, Alan Wenkus and Berloff).

The live performance and recording scenes are first rate, with special mention going to the first time Eazy steps up to a mic to lay down his hit single “Boyz-n-the-Hood,” and equally powerful is Cube’s performance of an early version of “Gangsta Gangsta” at a nightclub where slow-jam R&B is the house style.

N.W.A.’s crooked manager, Jerry Heller (Paul Giamatti), a veteran rock manager who promises to lead them into the big dollars that go with being respected by white music players, seems no more monstrous than the dirty cops who abuse power, then and now. The only truly dangerous person in the film was revealed in a sneak peek at how bodyguard-turned-mogul Marion “Suge” Knight, played with terrifying force of presence by R. Marcos Taylor, weaseled his way into the lives of talented people.

Gray knows how to create a pressure-cooker atmosphere repeatedly, including one scene—depicted here as the inspiration for “F–k tha Police”—that can’t help but send chills down backs as recent events, of Black lives being snuffed out by the law enforcement, occur in rapid succession.

The encyclopedic soundtrack—ranging across the N.W.A. catalog, its members solo ventures, their old-school R&B influences and the top-40 pop hip-hop that would displace as the dominant sound of the era—has been assembled with similarly meticulous care.