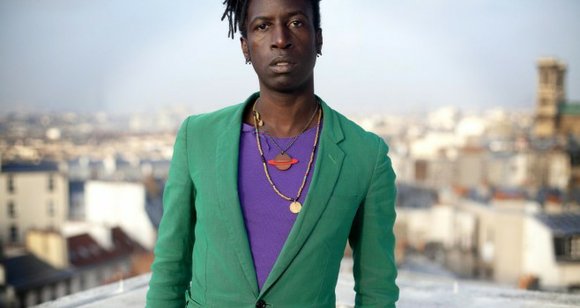 Writer-actor-activist Saul Williams has released a number of vivid and emotionally penetrating collections of poetry, music and film. After emerging with his breakthrough performance in the captivating independent film “Slam,” co-starring with Sonja Sohn of “The Wire,” in 1998, Williams has contributed a large and extensive package of artistic overtures in less than two decades. He has created a collection of literature, music and artistic content that includes the contributions of other brightly complex artists such as Trent Reznor, who co-produced Williams’ 2007 musical opus “The Inevitable Rise and Liberation of NiggyTardust!” and Mos Def (currently known as Yasiin Bey), who hosted and introduced Saul’s appearances on HBO’s “Def Poetry.”

It’s hard to believe that Williams doesn’t struggle to outdo himself and continue to erect elaborate art projects after releasing five albums, acting in six films, publishing six books, touring globally and acting in a Broadway play, but I found myself sitting on the phone with him one morning to talk about his loftiest project yet: a transmedia (graphic novel, album and podcast) art project titled “Martyr Loser King.”

AmNews: The concept of “Martyr Loser King” came to you three or four years ago, right?

Williams: Yes, while I was living in Paris and traveling to a lot of places that I had access to from Paris. I was traveling to places like Senegal, South Africa, Europe and of course back and forth to the states, but I guess one of the major factors [about that time] was that I met my wife, Anisia, who is Rwandan. So I was learning more and more about the region of central Africa, and a few things came from my encounter with her, and a few other francophone people who pronounced Martin Luther King as “Martare Loozier Kying” (laughs). It cracked me up until I stopped and was like, “Holy shit, that’s a great idea!”

So you were inspired by international travel, African accents and annunciation?

When you live outside of the country [United States], the way you read the news is a little bit different. You gain this overview of what’s happening in New York and L.A. or wherever. Then of course, wherever you are, there’s news that’s local to that region. I was gaining a lot of perspective and wanted to find a way to talk through and about it all. But the thing is, I never felt compelled to fully tell the story [through the album] because the graphic novel is for that. I conceptualized it by making the music first.

Like Duran Duran and Phil Collins who composed their music based off African music and put out a bunch of conceptual pop music.

Exactly. I’m making a sci-fi story! It takes place in a village built of old computer parts and it’s turned on when a dude meets a girl who is a modem (chuckles), so it’s the ultimate turn on.

What’s the big turn on about a girl who’s a computer?

It’s not so much that she’s a computer. I was thinking about how the main character learned to code. He met this old guy whose neurological system is binary and he taught the main character to see Sirius with the naked eye, and somehow, between that and the fact that he grew up on this hill where colton was later discovered, he believes he has super powers by the time he actually encounters a computer. Nobody’s going to touch this guy’s confidence, he’s like Venus and Serena’s dad. He believes he’s got special powers (laughs).

So he meets this person named Neptune Frost, who was actually born a hermaphrodite. No one is fully accepting of he—she identifies as “her”—until they meet. She and [the main character] meet in Martyr Loser Kingdom. She represents the perfect wiring.

Where do you come up with this stuff?! I don’t get it, I’m moving slowly today—

(laughs) She represents the perfect wiring! He’s building a computer out of old computer parts.

Yeah, the perfect wiring. So he’s dealing with motherboards and all this shit, and he’s trying to figure things out, and everything that he theorized, she is. She is, and she knows it!

So “Martyr Loser King” is number one, the story of a hacker who gets labeled a terrorist and murdered, but it’s also about the rise of Neptune Frost because the next part of the story, the same story, is her side. That’s why I say there’s more than one album for “Martyr Loser King.” That’s just the first installment. I believe the graphic novel will be out in 2016. There will be a whole slew of new music as well. Right now I’m at about 35 songs.

This project seems like it’s in your realm, but it’s a bit loftier.

Yeah, I don’t know what I’m talking about, it’s true.

I didn’t say that. I think it’s fascinating. Are you attempting to fascinate yourself? Are you making this collection of art because you feel it has a purpose or are you filling up a few years in this imaginative world you’ve created just for the hell of it?

In this creative process, I am a factory at this point. This year, I wrote an album, a graphic novel, a book of poetry and a screenplay, and I’m not trying to be precious about it. I’m trying not to self-edit and complicate the process. I’m trying to transition into the comic world. This whole lofty concept was mainly for the graphic novel.

To get back to the album, “Martyr Loser King” has very little to do with the cities you’ve visited.

Not true. There’s one thing you should know particularly about [the song] “Burundi.” A guy named Adam Ant and another guy named Malcolm McLaren had this album called “Le Tambour Burundi”—“The Drums of Burundi"—and that drum sound actually became the root of what we know as new wave. When you listen to the song “Groundwork” [the opening song on the album] and you listen to the guitar rhythm [he sings the rhythm] and where I come in musically over it, I’m playing with one thing throughout the whole album, which has everything to do with every place I’ve visited: polyrhythm.