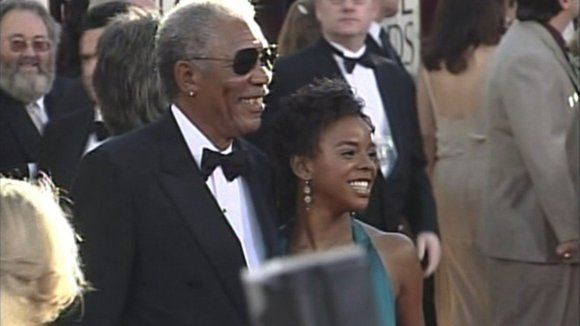 Freeman and Hines at the 62nd Golden Globes. E'Dena Hines was found stabbed to death outside her New York apartment. CNN

(CNN) -- E'Dena Hines, the step-grandaughter of actor Morgan Freeman, was stabbed to death early Sunday, allegedly by her boyfriend.

"The world will never know her artistry and talent, and how much she had to offer. Her friends and family were fortunate enough to have known what she meant as a person," Freeman said in a statement.

"Her star will continue to shine bright in our hearts, thoughts and prayers. May she rest in peace."

Police responding to a 911 call in Washington Heights before 3 a.m. Sunday found Hines lying in the street. The 33-year-old had been stabbed multiple times in the upper body, the New York Police Department said.

She was brought to Harlem Hospital, where she was pronounced dead, the report said.

Authorities didn't say what led to the stabbing.

Police said they charged Lamar Davenport, Hines' 30-year-old boyfriend, with murder and took him to Columbia Presbyterian Medical Center for a psychiatric evaluation.

'My dream has come true'

Hines was the granddaughter of Freeman's first wife, Jeanette Adair Bradshaw. The couple divorced in 1979 after 12 years of marriage.

Freeman has always referred to Hines as his granddaughter, spokesman Stan Rosenfield said.

In a blog post, Hines described herself and exuberant.

"Energetic. Loud. Animated. Thats probably the first three words that pop up into people's heads when they think about me," she wrote.

She also wrote that she had left New York for Memphis, Tennessee, two years ago because she felt unfufilled.

But recently she auditioned for a part in an independent movie, won the role and returned to New York, she wrote. On July 7, she wrote that she had begun filming a week earlier.

"My dream has come true and its just beginning," she wrote. "Life can make you want to give up or walk away; sometimes it gives you the strength to appreciate when you do get your happy ending."