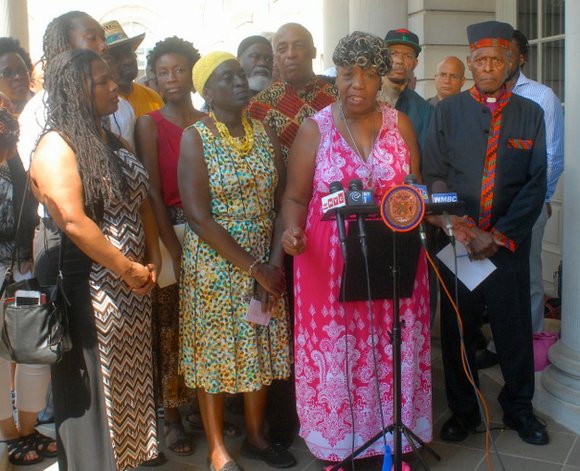 “We don’t want a state prosecutor to impanel a secret grand jury,” Barron told reporters. “That will leave us back at square one. We won’t have transparency.”

Barron made a reference to a common saying about district attorneys and pointed out how it isn’t always true for certain groups of people.

“You know how they say that the grand jury is so influenced by the DA that they can get an indictment on a ham sandwich?” said Barron. “But not a cop. Not a police officer. But now we won’t have to worry about the ham sandwich or the cop because they’ll be out of the process and it’ll be public. We won’t have to fight for transcripts or fight for minutes.” Currently, state prosecutors can hold a preliminary hearing if they choose to do so, but they don’t normally in cases of police-involved killings of civilians.

The Barrons were also joined by Gwen Carr, the mother of Eric Garner, the Staten Island man who was killed by an NYPD officer using a chokehold while trying to arrest him. That officer, Daniel Pantaleo, wasn’t indicted by a grand jury and few details were made public from the proceedings. Actions by groups such as the New York Civil Liberties Union and the NAACP Legal Defense Fund to secure minutes and testimony via court appeals have failed up to this point.

Said Inez Barron, “This is an attempt to say that we need to continue to fight to be able to correct those injustices. We don’t want to have to wonder what happened in the grand jury room. We want public hearings so that people will know what the DAs are presenting in terms of their evidence.”

The couple also challenged politicians who call themselves progressive to publicly come out and support the proposed legislation. Barron said he found out about the bill from a relative in California who sent him and Inez details. He said they wanted to have a final judgment of his proposed bill as soon as possible. He sees this bill as not only a step in the right direction, but also the best way to do Garner justice.

While Charles Barron hopes to change the legal proceedings via legislation, the NYCLU still wants the information from the Staten Island grand jury released. This week, the organization requested that the New York Court of Appeals review a lower court’s decision to keep secret the records from the grand jury that didn’t indict Pantaleo, citing a lack of accountability for Garner’s death, thereby eroding the public’s confidence in the justice system.

“New Yorkers have insisted on reform since the Eric Garner grand jury decision, and they and their representatives need to know what, if anything, is broken before they attempt to fix the problem,” said NYCLU Legal Director Arthur Eisenberg in a statement. “Without understanding how or why the grand jury reached its decision, major policy discussions on grand jury reform with potentially lasting implications are taking place blindly.

“So much is at stake regarding criminal justice reform in this case that the public’s need to know what happened outweighs any current interest in maintaining the secrecy of the Garner proceedings.”