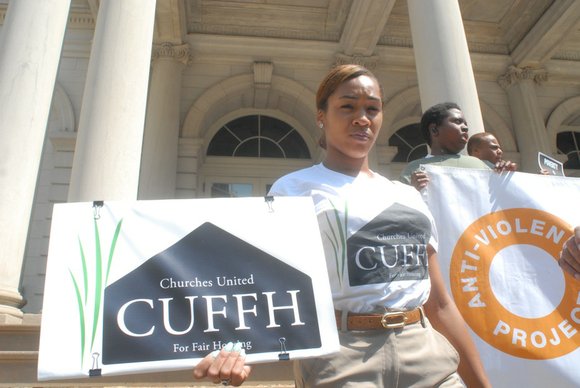 This week, members of the United Nations brought up the issue of increasing homelessness in New York. At about the same time, at a rally at City Hall Tuesday, Communities United for Police Reform, elected officials and a diverse group of homeless and anti-poverty advocates united to call for an end to the recent public dialogue in New York City that has, in effect, sought to demonize and shame homeless and poor New Yorkers. The group specifically pointed to media coverage by the New York Post—that others have followed—and a recent campaign by the Sergeants Benevolent Association to take pictures of homeless and poor New Yorkers on the street as beneath the character of New York City and sowing division through vilification of vulnerable New Yorkers.

“The direction of the conversation in our city about homeless New Yorkers has continued to get crueler and more damaging to our city, and enough is enough,” said Priscilla Gonzalez of Communities United for Police Reform. “The demonization of our poor and homeless neighbors dangerously promotes harassment of them and only serves to divide us while failing to move us toward real solutions that alleviate poverty and the affordable housing crisis. It’s time to focus on solutions that will truly address those issues, not dog-whistle politics that demonizes and shames poverty.”

Council Member Stephen Levin, chair of the Council’s Committee on General Welfare, stated, “Rather than singling out and stigmatizing individuals who need our compassion, we should focus on ensuring that city services meant to help them are accessible, properly funded and responsive to their needs. What we need to effectively combat homelessness is a robust NY/NY IV agreement that guarantees the construction of 30,000 new units of supportive housing in New York City over the next 10 years, not public shaming.”

The group of advocates and community leaders sought to move the public conversation away from the destructive path that tears poor and low-income people down, and toward solutions that can improve the city and advance its best interests.

“Those who attack homeless people of New York have disgraced themselves and our city,” said Andres Perez of Picture the Homeless. “The SBA and New York Post have offered our city nothing constructive in their demonizing and fearmongering of New Yorkers. We refuse to sit by silently while they continue with empty, regressive political rhetoric that threatens to take our city backwards. We want to focus on real solutions for homeless New Yorkers—a focus on permanent, truly affordable housing that is a fraction of the cost of temporary shelter.”

Christy Parque, executive director of Homeless Services United, stated, “We must, as a city of bighearted New Yorkers, work towards creating opportunities for our most vulnerable citizens that allows them to transform their lives by becoming stably housed. Sound policies that fund critical services, more affordable housing and a new NY/NY IV supportive housing agreement are the solution, not demeaning and dehumanizing them by creating an Internet meme out of their suffering.”

Shelby Chestnut of the New York City Anti-Violence Project stated, “The New York City Anti-Violence Project stands with all New Yorkers who are demanding an end to the dehumanization of low-income and homeless New Yorkers, many of whom are people of color, LGBTQ, HIV-affected and immigrants. They are being targeted and criminalized by news outlets and the SBA simply for surviving, and instead we call for increased access to services to address the needs of low-income and homeless New Yorkers who are some of the city’s most vulnerable populations.”

By focusing on the solutions of affordable housing and support services for homeless and low-income New Yorkers, advocates urged New Yorkers to engage productively by supporting policies that reduce homelessness.

“There but for the grace of God go you or I!” said Marc Greenberg, executive director of the Interfaith Assembly on Homelessness and Housing. “Homelessness is a terrible tragedy, not a crime. The homeless person we encounter on the street is at the lowest point in their entire life with no option left but the streets, subways or the shelters. They need and deserve our compassion and assistance, not our ridicule, persecution or harassment. Let’s not blame the victim.

“We must work together with our elected officials to ultimately turn this crisis around, by building affordable housing for working-class New Yorkers, supportive housing for those in need, providing legal counsel to the 15,000 households a year evicted in housing court because they don't have a lawyer and by protecting tenants from rent increases they can't afford. Let's remember we are all one family, and we must do our part to care for each other. Working together, faith leaders, citizens, elected officials, social service agencies and the NYPD, we can make this right. Let’s be the great city that we can all be proud of.”

Council Member Brad Lander said, “It’s morally backwards to shame our most vulnerable citizens when we should be focused on helping them. It’s time that we as a city come together thoughtfully, stop focusing on humiliating New Yorkers in need and start working to support solutions that address the systemic causes of inequality that continue to cause these problems.”

“The campaign launched by the SBA is distasteful and inhumane,” said Seymour James, attorney-in-chief of the Legal Aid Society. “Homeless New Yorkers need affordable housing and services, not shame and publicity that incites fear mongering. In New York, we treat people better than this. The campaign by the SBA only serves to embarrass us and does nothing to help our homeless neighbors nor reduce crime.”

Fred Ginyard, director of organizing for FIERCE, said, “On August 6 of this year, the Department of Justice released a briefing calling it unconstitutional to criminalize people who are homeless in a city that cannot shelter them. FIERCE was founded on principles that hold that every person, regardless of things like housing status, race, age, gender presentation or other life circumstances, should have the ability to access public space without the fear of being harassed or brutalized by the NYPD. This is a moment for New Yorkers to unite behind solutions that reduce poverty and provide equality, rather than validating a morally bankrupt dialogue that promotes blatant discrimination against one of New York City’s most vulnerable populations.”

Joel Berg, executive director of the New York City Coalition Against Hunger, said, “I believe that most individual New York City police sergeants perform admirable public service, risking their lives to protect the public and uphold the Constitution while respecting the rights and dignity of all residents of the city. Rank-and-file officers are ill-served by public policies which criminalize the tragedy of having no home. Officers are even more poorly served by a union that is bent on dehumanizing our most vulnerable neighbors and trashing the Bill of Rights. The union’s actions defy every religious tradition, every ethical tradition and every ounce of common sense. Effective police forces earn the respect and trust of the populace—they don’t demonize the populace.”

These actions have generated a public conversation that has more often focused on homeless and poor New Yorkers as inconveniences to the city rather than on the solutions that address poverty. This attitude is dehumanizing and destructive to our city by criminalizing poverty and homelessness, labeling New Yorkers based on their appearances and promoting harassment. It is also divisive and a distraction from real solutions to homelessness and poverty, which offer a productive way for New Yorkers to support reducing the number of homeless New Yorkers and those living in poverty.

“A safe and healthy New York City comes from creating conditions in which people can live in dignity, not criminalizing New Yorkers who are homeless,” said M. Dove Kent, executive director of Jews for Racial & Economic Justice. “Fearmongering and demonization of the poor dehumanizes our neighbors and is an inhumane distraction from creating equity in jobs, housing and education.”

“Right now, New York City’s number one public safety priority must be fixing the broken relationship between police and the communities they are supposed to protect and serve,” said Donna Lieberman, executive director of the New York Civil Liberties Union. “We need to stay focused on real solutions like the Right to Know Act, which requires officers to identify themselves and explain to people their rights. Any serious effort to make our city safer must first increase New Yorkers’ trust in the police.”